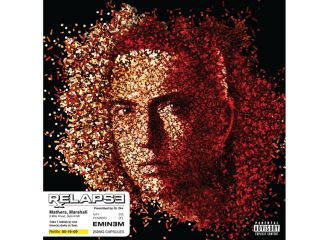 Eminem's Relapse: don't operate heavy machinery while listening to this one

Eminem's just-released artwork for his upcoming album Relapse makes us long for the days of the vinyl LP. What better way to take in the prescription pill-laced collage of Slim Shady?

On his own Twitter page, Eminem himself writes "This is getting very real..." and includes a link to the image that you can see here.

The artwork is a close-up head shot of Em over a black background, with his face being a mosaic of hundreds of little pills and capsules. Eminem has spoken publicly about an addiction to prescription drugs, which included a well-publicized stint in rehab and a later relapse - hence, the title.

Though it may be difficult to read, the sticker on the lower-left hand corner of the cover is a de facto part of the artwork. It reads "Mathers, Marshall, 8 Mile Road, Detroit, Michigan," "Refills: 5-19-09," "Prescribed By Dr. Dre."

With less than four weeks till the release date, Eminem is obviously hoping this is a prescription you'll obtain through the proper channels.