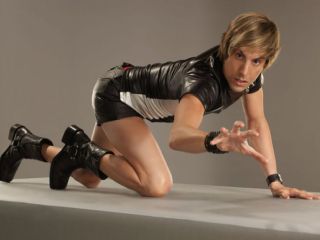 Bruno made quite an entrance at the MTV Movie Awards.

So was Eminem's reaction to Sacha Baron Cohen's latest stunt real or staged?

That's the question being asked today after the comedian, in the guise of his gay Austrian TV presenter Bruno, descended from the heavens and landed crotch-first on the rapper's face.

Sporting a pair of angel wings and little else to hide his modesty, he flew in above the crowd, only to suffer some kind of 'technical problem' that forced him to crash-land in the audience - and right on top of Eminem.

There seems little doubt that this was intentional, but what isn't clear is whether Eminem'a apparent fury was genuine or simply part of the prank.

Watch the clip below and decide for yourself. What's absolutely certain is that bemused 'Best Male' winner Zac Efron didn't have a clue what was going on.