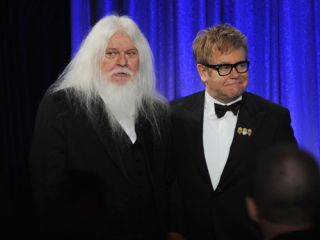 Want to see Elton John perform his greatest hits? (Thought: that could take several days, couldn't it?) Well, if you're in the US, you're in luck, because Sir Elton has announced a new series of dates called 'Greatest Hits Live,' during which he'll perform number one chartbusters and classic album tracks that span his five-decade career.

For these concerts, Elton's band will feature two mainstays - guitarist Davey Johnstone and drummer Nigel Olsson - along with Bob Birch on bass, John Mahon on percussion and Kim Bullard on keyboards.

The dates that have been announced are as follows:

In addition, John and his idol, Leon Russell, with whom he paired up with for the critically acclaimed album The Union, have recorded a Celebrity Podcast for iTunes. During the conversation, the two reveal how the collaboration came about and how they came to work with Grammy-winning producer T-Bone Burnett.

If that weren't enough, Russell also shares stories about Bob Dylan and the Elton John song he adores but can't sing; Elton divulges his favorite rap song of 2010 and the '80s tune that brightens his spirits. The duo also offers insight into Lady GaGa, Little Richard, eight-inch high heels and much more. You can listen to it for free right here.