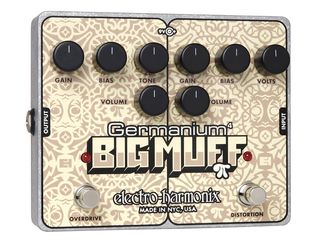 PRESS RELEASE: Electro-Harmonix has resurrected the warm sound unique to the germanium transistors of the 1960s and applied several modern twists to deliver a new pedal with a vintage vibe and feel, but modern control and power.

The Germanium 4 Big Muff Pi features two independent circuits, one Overdrive and one Distortion, that can be used individually or in series. The Overdrive and Distortion circuits each use a pair of NOS NKT275 germanium transistors. Purists will appreciate the authentic sound of these vintage components and the fact that the Germanium 4 is true bypass.

The Overdrive section features independent controls for Gain, Bias, Tone and Volume, while Distortion provides independent controls for Gain, Bias, Volts and Volume. The Bias controls adjust the tonal character of the distortion by changing the bias of the signal before it is distorted by the germanium transistors. The Volts control enables the player to dial back the amount of voltage supplied to the Distortion side and create varying "dying battery" sounds.

Stack the overdrive and distortion in series and the player has two individual control sets that work in combination for a hybrid tonality that can be mixed and balanced. When combined, the four germanium transistors are stacked providing a new power edge in performance.