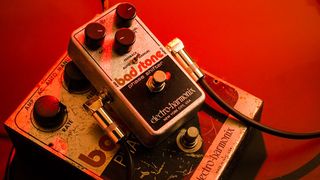 Electro-Harmonix has reintroduced the Bad Stone - the world's first six-stage phase shifter that was first introduced in the late 70s.

The Bad Stone was the first pedal in EHX's catalogue to feature the 'manual' fixed-phase circuit. This allows you to freeze the sweep of the phaser's LFO for static, resonant sounds.As well as the manual mode, the latest incarnation of the Bad Stone features the same three-knob design as the original. The Bad Stone has also been given some functional tweaks to bring it up to date for modern players (nano size housing, true bypass switching and a standard AC power jack).

You can hear the Bad Stone - plus take a short lesson on the history of phasing from Electro-Harmonix mainman Mike Matthews - in the video below.