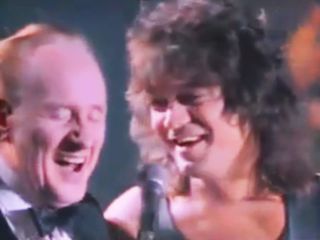 Les Paul and Eddie Van Halen share a laugh in 1988

Eddie Van Halen's dynamic playing style and his unorthodox approach to guitar design are natural extensions of the inventions and breakthroughs of Les Paul, who passed away yesterday. Today, Van Halen remembered the "Wizard Of Waukesha" thusly:

"Les Paul was a pioneer, an innovator and a dear friend. I am deeply saddened at the news of his passing. It was truly an honour to have known him and sit around with him talking guitars.

"I am especially glad that he, my son Wolfgang and I had a chance to spend some quality time together in the past few years. I will miss him dearly."

Although the Les Paul was never Van Halen's main weapon of choice (he once admitted to ruining a vintage model while attempting to build the ultimate rock axe), the guitar has been featured on select VH recordings since 1978. (Eddie even painted one red and adorned it with his with trademark black and white stripes.)

Here's a video from 1988 in which Eddie, sans Les Paul in hand, gives thanks to Les Paul the man during a tribute ceremony at The Brooklyn Academy Of Music.