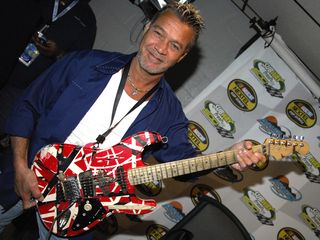 For Eddie Van Halen, guitar playing won't be a pain in the hand any longer (Image credit: Robert LeSieur/Corbis)

Eddie Van Halen is recovering from hand surgery that was deemed necessary to alleviate increasing pain in his left hand.

According to Rolling Stone, the guitarist says he began to experience pain in his thumb and pinky during the last portion of Van Halen's 2007-2008 tour.

"It got progressively worse to the point that about three months ago I wasn't able to play at all," says Van Halen. "My pinky and my thumb were totally locked up and felt like there was something broken."

Surgery deemed the only option

Although specialists in Germany initially treated Van Halen for arthritis, they soon found the real problems: a bone spur, twisted tendon and a cyst in the joint of his left thumb.

Unfortunately for Van Halen, surgery was his only option. "Which of course scared the shit out of me," he says, "but I was told it was the only way to fix it."

(Van Halen's aversion to going under the knife is understandable. In the late '90s he underwent hip replacement surgery. Around the same time, the heavy smoking guitarist was treated for tongue and mouth cancer, resulting in a portion of his tongue being removed.)

Happily, Van Halen claims that his hand surgery is a success and that once his stitches are removed, he'll be able to start playing the guitar again - a little bit at a time, of course.

"I am totally jazzed that they found the problem," he says. "In about four months my hand will feel like I am 18 again."

And you know what that means...Eruption Part II!