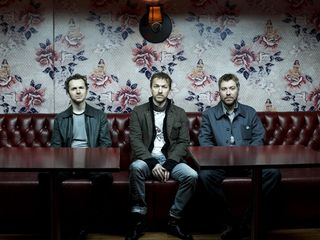 Forget The Dark Side Of The Moon, this is as prog as it gets

We have to admit, when we saw this story on a lazy Easter Sunday, we thought it was an April Fool. But apparently not.

According to an interview in The Oberver newspaper promoting the band's forthcoming best-of, The Places Between, Doves guitarist Jez Williams recently bounced a riff off the moon, using it as his own interstellar delay pedal at Jodrell Bank observatory in Cheshire, UK.

Assisted by the facility's resident astrophysicist Dr Alastair Gunn, who "had a load of dials on a box", Williams "plugged into it, [then] he just dialled the moon, like you do... and two and half seconds later it [the riff] comes back.

"It messes up the signal beyond recognition, it's pretty wild. We've got a recording of it that we'll definitely use at some stage."

Click here to read the full Doves interview, which includes a more scientific description of the process involved.

Back in March 2009, we checked out Jez Williams' live guitar set-up on tour in Coventry ahead of the release of fourth studio LP Kingdom Of Rust. Sadly, the moon doesn't feature, but you can see our video walkthrough here: