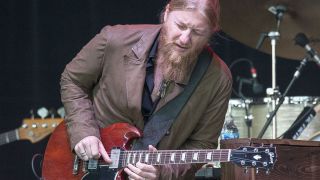 He's the ultimate slideman and the A-list sideman - but can Derek keep trucking through the 10 questions we ask everyone?

"My very first guitar was a Kay knock-off acoustic, and it was called a Jay. I got that one in a garage sale back when I was eight or nine years old. I think it was only about $5. But, y'know, it got me started. I still have it, and it's almost playable - but it's really not a great guitar."

The building's burning down: what one guitar from your collection would you save?

"I have a Gibson SG that I've had signed by a lot of people that I've been lucky enough to play with - and a lot of them are no longer with us. I played that guitar for years, and I had Hubert Sumlin and BB King and Little Milton sign it: a lot of my heroes that have passed on. I'm not that possessive about guitars, but I think, that one, I'd probably grab."

What's the oldest guitar you have?

"I have a few late-1920s Gibson acoustics. A friend had an old 30s Gibson L-00, and it was the best-sounding acoustic I'd ever played, so I got on that kick for a little while. There are guitars from that era that are amazing, but not super-collectible, so they're not that expensive. For the same price as a new, good acoustic guitar, you can get this old 1920s instrument, and when you think about what that guitar has seen, it gives it a whole different level."

What aspect of playing guitar would you like to be better at?

"As lame as it sounds - all of it. I try to keep all aspects of my guitar playing growing at the same rate, but when I play with Doyle Bramhall or Jack Pearson - the way they play rhythm guitar, the way they comp behind things, it's pretty amazing. Maybe I'd like to be better at harmony, y'know, so I could think around the corner a little bit more. I should quit hoping and just do it!"

When did you last change your own strings?

"If I break a string on stage, I'll change it, just because I like having the instrument in my hands. Y'know, Bobby, my guitar tech, will leave a few guitar strings on my amp, and if it's in a portion of the song where I can just pass it off and somebody can solo while I'm stringing up, I'll do it on stage. I did that about two gigs ago. It doesn't happen all that often. I guess we're lucky that way."

What are you doing five minutes before you go on stage?

"With an 11-piece band, I'll be rounding everybody up. I write out a setlist an hour before the show, so if you're throwing in tunes that you haven't played in a while, I'll be going over it with Susan [Tedeschi], and just reminding people of some segues or changes in the solo sections. So a lot of times, you're just rapping about musical things that are gonna happen during the show."

And five minutes after?

"I'll probably be critiquing all the things that we fucked up! We break it down, and I'll speak to certain people individually, y'know, not barking things but just like, 'Hey, we gotta remember this for the next time we get to that section' or whatever. It's best to do that while you're thinking about it. If you get too far away from the show, something that seems life‑or-death while you're on stage, we'll totally forget about."

"I use DR Strings, like, an 11, 14, 17, 26, 36, 46, and always an unwound third, acoustic or electric. DR Strings have been pretty consistent for me. I change strings every show because I break a lot of them, and they just seem to be consistent. But I don't overthink that stuff too much, either. I'm not as much of a gearhead as I should be, I guess."

When was the last time you practised, and what did you play?

"In the middle of making a record, sometimes I'll leave certain solo sections to do last, and certain tunes that I want to give a lot of thought to. So I'll practise those. A few days ago, there was one section in a tune, and I wanted to make sure that it would be memorable, so I was tripletracking guitars, coming up with lines, finding different harmonies. In making a record, I spend a lot of time practising."

What advice would you give your younger self about guitar if you had the chance?

"I don't know if I would give myself any advice. In a lot of ways, I feel like the best lessons I ever learned were from messing up. Some things you can only learn through experience, by playing things wrong, or not being aware enough, or not being prepared for a gig. If you get bruised, you're gonna remember it, and you're probably not gonna do it again. I feel like those things are as important as the successes."

Tedeschi Trucks Band perform at Prudential BluesFest at The O2 in London from 7 to 8 November.