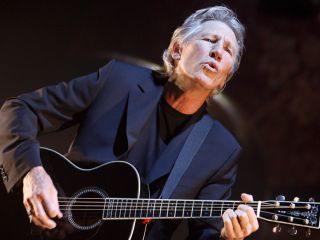 Roger Waters is tearing down 'the wall' between him and David Gilmour (Image credit: Alessandro Della Bella/epa/Corbis)

Pink Floyd's David Gilmour and Roger Waters just can't keep away from each other, no matter how much they try. After years of discord, the duo, who played a short set together last weekend at a benefit for the Hoping Foundation in Oxfordshire, England, plan to reunite once again, performing Comfortably Numb at a to-be-determined stop on Waters' upcoming tour celebrating the 30th anniversary of The Wall.

Posting the news on Facebook, Waters describes how he initially received an e-mail from Gilmour, who had performed for the Hoping Foundation in 2009, proposing that the two do a version of The Teddy Bears' classic To Know Him Is To Love Him for the gig just past.

At first, Waters, fearing Gilmour's "superior vocal skills," balked at the idea. Then he got another e-mail from Gilmour that sealed the deal: "If you do 'To Know Him Is To Love Him' for The Hoping Foundation Gig, I'll come and do 'C. Numb' on one of your Wall shows."

According to Waters, "You could have knocked me down with a feather. How fucking cool! I was blown away. How could I refuse such an offer. I couldn't, there was no way. Generosity trumped fear. And so explaining that I would probably be shite, but if he didn't mind I didn't, I agreed and the rest is history. We did it, and it was fucking great. End of story. Or possibly beginning."

The show at which Gilmour will join Waters is being kept a secret. In the meantime, check out the song that made it all possible (with a then 17-year-old Phil Spector, no less!).