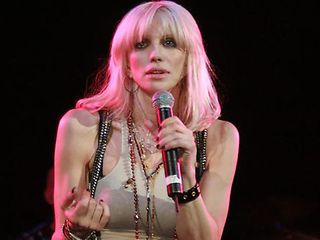 Last week we told you that Courtney Love had apparently scrapped the album she had been working on for three years. Love has now written in her MySpace blog that the album is on schedule and that "no 'scrapping' is going on."

Love writes that the Linda Perry-produced record will be turned in to the latter's Custard label by mid-July and that the only work being done are "a few retakes."

"Don't assume you know any songs on this album," she continues. "Some may sound somewhat familiar or even have the same titles and arrangements. A few are just precious diamonds I wouldn't touch, but there's TONS of NEW ones which you haven't a clue about."

For her part, songwriter-producer Linda Perry says, "I think we made a beautiful, vibey, magical record. Courtney Love's name should be right next to Bob Dylan when they say best lyricist of all time."

Further in her MySpace post, Love says she is "playing" with former Faith No More member Roddy Bottum and Stuart Fisher, but fails to elaborate in what capacity.