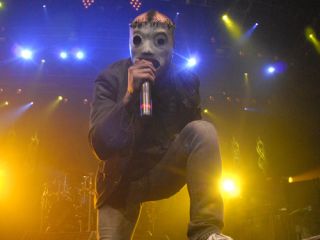 Slipknot frontman Corey Taylor says that it's "too soon" for the band to begin planning for a new studio album. The singer, who recently said he "cannot see a new Slipknot album happening," now appears to be ammending his stance.

In a new interview with Kerrang! Taylor said he believed the band will record again "one day," but not for some time. In his view, not enough time has passed after the death of bassist Paul Gray for the Iowa metal stars to begin thinking about a follow-up to their fourth album, 2009's All Hope Is Gone.

"It's still too soon, at least that's how I feel," Taylor said. "I'm not ready to make a Slipknot album. I think there will be a day when we do, but for me, doing it now wouldn't make sense. You can't do a three-week tour then jump into the studio, especially after something like this. It makes more sense to do a few tours and reconnect as a band first.

"If we jumped right in, it wouldn't be about the absence, it would be about the rest of us and it's too soon for that. We were the nine, but there's a piece missing. So we should allow people to pay their respects before we come out with new music. We should do this right."

And part of doing it right includes a US tour, which is in the works, and an appearance at Rock In Rio this fall.