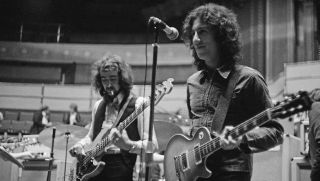 Peter Green occupied a special place in the hearts of British guitarists. Being right there at the forefront of the blues explosion that hit our shores around 1966, Peter's contributions to John Mayall's A Hard Road album showed a blues player of immense talent.

As well as his instrumental virtuosity or the incredible feel in Someday After A While - Greeny also showed his writing ability with tracks like The Supernatural and The Same Way.

Having replaced Clapton in Mayall's Bluesbreakers and managing to fill those huge 'God'-like boots with grace and confidence, Peter quit the band to form his own outfit with fellow Bluesbreaker John McVie on bass, drummer Mick Fleetwood and previously unheard-of guitarists Jeremy Spencer and Danny Kirwan.

Although Fleetwood Mac began as a generic blues band, Green's introspective compositions soon dominated the group's output. Black Magic Woman, Man Of The World, Oh Well Parts 1 & 2, Green Manalishi and Albatross all made the British charts, before Peter's well-publicised withdrawal from the scene left us without him for more than 20 years.

When Guitarist magazine spoke to him on the road with his Splinter Group in 1998, Greeny is as self-effacing as ever, refusing compliments and simply cannoning praise on to his own heroes and influences.

The chat began by asking Peter what it feels like to be up on stage again, as the centre of attention…

But you went on to far greater things after Mayall. Some of the songs you wrote with Fleetwood Mac were classics.

"Well John Mayall went somewhere fantastic too; really powerful singles - a bit too powerful, when I think about it. Especially with drummer Aynsley Dunbar - it was really a powerful outfit."

Did you come from the blues, or were you like Eric and got into it via Chuck Berry?

"I've never been that much into Chuck Berry; I prefer Bo Diddley. When you say Chuck Berry, that takes me to The Yardbirds; they were categorised as playing R&B and this was Chuck and Bo. They did Little Queenie and it was out of this world. But I was a Rolling Stones fan and a Beatles fan. Then I met a couple of girls and they said, "Who's your favourite group?" and I said "Rolling Stones, who's yours?" They said, "Yardbirds" and I said, "What's that? Yardbirds?" I couldn't even pronounce it.

"They said, "Yeah, you should go and see them; they play at the Marquee Club and the Crawdaddy Club; they've got a really good bass player". I was playing bass then, so I went to see them and she was right.

"It was very advanced bass playing; lovely Epiphone Rivoli bass and a Marshall 50-watt amp and it sounded fabulous. Paul Samwell-Smith used to play chords on the bass, three strings at once, and it sounded really super. Anyway, I got in a little group called the Muscrats and I got to play the Yardbirds stuff."

Clapton didn't impress you at first then?

"Well, I wasn't a lead guitarist then, I played bass. Anyway, he was the other side of the stage so I couldn't hear it too well. It was all very good, though, very exciting. And I decided to go back on lead guitar after seeing Eric Clapton.

"I'd seen him with The Bluesbreakers before he considered singing and his whole concentration was on his guitar - he had a Telecaster - and it was really impressive. He had a Les Paul, his fingers were marvellous. It took everything away from me, like my birthday, Christmas; you forgot everything, just listen to this.

"All music that you'd ever heard was washed away by this group of guys that were letting Eric Clapton take the floor. I loved Les Paul and Mary Ford and I was surprised to see this guitar turned over to this style, but once it got there it was just… you couldn't compare it to anything. This guy knew how to do a bit of evil, I guess."

So you had to go and buy one?

"I stumbled across one when I was looking for something more powerful than my Harmony Meteor. I went into Selmer's in Charing Cross Road and tried one. It was only £110 and it sounded lovely and the colour was really good. But the neck was like a tree trunk - like the tree trunk was spliced down the middle and half of it was used for your guitar neck.

"It was very different from Eric's, which was slim: very fast action. I've never seen another guitar with such an old-fashioned neck. But I couldn't consider a Telecaster for some reason and I didn't want a Stratocaster.

"Y'know Eric's Les Paul would go for fifty million now. It was a special one. Mine was a funny old fuddy-duddy, sweet old thing. If I had my time again I wouldn't sell my Harmony Meteor, I'd progress on that because the sound was so lovely at the Mayall audition. I use a Fender Strat now and a Gibson Howard Roberts Fusion model, but I'm thinking of getting a Gretsch Roc-Jet as well."

So the sustain your Les Paul gave, was that the inspiration for The Supernatural?

"No, Mike Vernon (producer) came up with the idea for The Supernatural. He said he'd seen this guitarist who'd played a high note, sustained it and then let it roll all the way down the neck. But I played it and I decided on the sequence."

"Well I was forced into songwriting. I'm not really a songwriter. John Mayall said to me; "What other things do you do?" I think he liked my harmony in Coming On Top Of The Hill (A Hard Road), so I didn't fail completely with him. But I've never really had the blues like someone who lived in America. I could really only scrape about with my love for American music, for rock and roll, and somehow it went from that to the blues."

Although you're indelibly linked to the blues, there's always been more to your music than just 12 bars.

"As much as I love the blues I've always found the format to be quite restrictive. A lot of the songs that I've written in the past, like Man Of The World, were a long way removed from any blues structure.

"These days I'm a great fan of what they call world music and listen to a lot of Arabic music, Chinese music - which is probably my favourite - along with Greek bazouki music, and belly dancing music which I go to see whenever I can; all kinds of stuff. I do still listen to blues but it's in there with everything else."

Do today's audiences persuade you to do all the old songs?

"Well, to be honest, we don't really know what else to do. We don't have that many tunes. But I've done Man Of The World so many times - you can't conceive how many times - and I don't want to do it any more."

"I don't think of them. They're not John Lennon any more; never really were Ringo Starr; George, I'm still working on, and Paul is the only one – Paul McCartney all the way."

What about BB, Albert and Freddie King?

"I don't have to go to work because of them. Their styles were simple enough for me to get into professional music."

Gary Moore on Peter Green – "He was absolutely fantastic, everything about him was so graceful"

When you were with Mayall, you and Clapton were at the cutting edge. There wasn't really anybody who could play faster than you guys at that time…

"Well, there was, but it was nonsense. What they played was rubbish; that's the best comment you could make. They were just playing for speed, not even lingering on one note long enough to make it anything but a high-speed joke.

"I didn't really know what I was doing on the guitar. I was very lucky to get anything remotely any good. I used to dash around on stepping stones, that's what I used to call it. But 'safe' notes, you know? And I was finding that things were running away with me. It was very embarrassing."