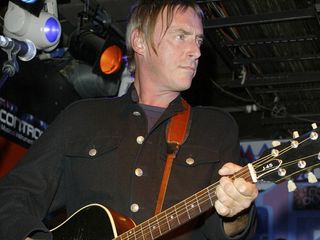 Weller onstage with his Gibson J-45

With his new album, Sonik Kicks, set for release on 26 March 2012, we look back to a decade ago when the Modfather was taking a stripped-down acoustic guitar set out on the road.

"You know the problem with guitar magazines?" barks a thick London accent. We get the feeling we're about to find out. "It's always the same shot - some bloke there posing like this [mocks obligatory holding- guitar-plus-moody-expression]. Why don't you have more live shots? Can't we do a live shot?"

"Er, we don't really know," we reply nervously. We'd heard Mr Weller could be a little bit 'difficult' when it comes to interviews. After all, 20-plus years of getting kicked in the nuts by journalists might make a man wary.

By way of explanation, we manage: "Something to do with picture quality, I think." Pathetic. He's going to tear us to shreds. "Oh," he shrugs matter of factly, tucking into a box of KFC. "D'you want some food? Or a drink - whatever, help yourself. Anyway, go on mate, fireaway..."

So goes Guitarist's first two minutes face to face with Paul Weller. And what a face: the chiselled features, the piercing eyes. The same set of facial furniture, in fact, that first belted out The Eton Rifles and That's Entertainment; that first crooned You're The Best Thing, Wild Wood and You Do Something To Me.

We're backstage at Bristol's Colston Hall to talk about his current record Days Of Speed, a warts-and-all live solo acoustic affair that's as remarkable for concept as it is content. No MTV, no huge fancy production and no pseudo unplugged band. Just Weller and his guitar.

Then again, renaissance is something he's good at. Old Frenchie coined the term in the 1500s with his music, art and literature, but even the French only managed one. Weller, Modfather, Dadrocker, Britpopper, British Neil Young - whatever tag you give him - is currently on renaissance two, somehow managing to widen both creative horizons and commercial reward with each shift.

Now the man from Woking has embarked on a new challenge. Not another direction shift of Jam-to-Style Council or Council-to-solo career magnitude, but something which draws together the common denominator in all his work and lays it bare for all to see: the humble song. What better way to demonstrate than hit the road with just a head full of lyrics and a handful of guitars?

What made you decide to do this record?

"I thought of the idea at the end of 2000. I wanted to do something difficult, just to have that challenge of whether I could hold an audience, me on my own: me and my songs.

"And it sort of spiralled from that because, originally, I was talking about little clubs, like 300-400 capacity. Now it's got really big, and not just in this country - we've been back to Germany twice this year which is bloody unheard of! The States, Japan... something like 10 countries."

A good test of the songs then.

"It's been all sorts of things, but it's been a personal triumph for me. It makes me reappraise my own stuff, in a good way. You can see what's strong, what people like. It's also been a good way of getting back to my audience.

"Even though they're fair-sized gigs, there's this kind of intimate thing. No distractions, no flashing lights. It's just the songs on a very simple level of communication. Sometimes you can forget that with all the other malarkey."

What's been the most challenging aspect of the tour?

"Well, sitting in front of God-knows how many thousand people with just a guitar is a challenge in itself - you're shitting yourself! And it's the same every night, to be honest.

"At times I've looked around and thought, I could do with Whitey [Steve White, drums] kicking in about now. It's hard work on your own."

What guitars are you currently using?

"I've got a Gibson 12-string, which I've had for some time, and a J-45 I've also had for a while; they're the main ones. One that I got recently is the Gibson Everly Brothers; that sounds nice.

"And I've got another guitar that was bought for me by the guy who owns the record company, it's called a Mossman. It sounds like a piece of shit, but apparently it's like, 12 and half grands' worth, which is completely beyond my comprehension!"

What made you pick up the guitar in the first place?

"Overall I think it was The Beatles. I was such a massive fan of all the '60s pop bands, but if I had to single out one band, it would definitely be The Beatles."

How do you view your change of sound in the '90s? Did you mellow out a bit?

"I think what happened to me is that I started listening to a much broader spectrum of music. Crosby, Stills, Nash and Young, a lot of Neil Young, in fact. Also Van Morrison; stuff I wouldn't have listened to before, things I wouldn't have been aware of before. So that was a real learning experience for me.

"And in the '90s, I think I rediscovered my guitar. The Jam was obviously very guitar-based, but in the Style Council I just got really disillusioned with playing the guitar. The further it went on, the less and less I played, to a point where I couldn't pick it up any more.

"You know, when you stop picking it up at home... I never really felt I was really getting it together with the Council. I'd lost that love relationship with it.

"And then I started to get it back again, and also I really got back into playing live again as well. With the Council, it had got really stodgy and boring towards the end, and I didn't want to play live.

"But for me the best thing I can do is play live. The best way for me to put over what I'm trying to do is to play live. Whether it's an acoustic show, electric or whatever... if I shine at all, that's where it all really happens - it just took me a while to rediscover that."