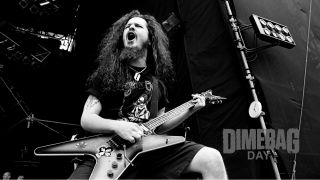 Integrity and a fearsome heaviness are what catapulted Dallas band Pantera to cult metal status.

Their influential axeman, Dimebag Darrell, spoke about his influences and music in this 1994 interview with Guitarist magazine.

How did you first start out in music?

"I used to skip school and paint my face with Ace Frehley Kiss make-up. My Dad got me my first guitar and I then started generally dicking around with it, learned how to make a barre chord, discovered feedback and that was the end of it. No formal lessons or training or shit, just listening to records and picking up licks and stuff.

"My heroes were Eddie Van Halen - especially after Van Halen I, II, III, and IV - Randy Rhoads, Ace Frehley and dudes like that. My brother played drums and we jammed in the garage and started writing our own stuff.

"But it took us a while to get our chemistry together when we were doing our own thing and, err, that's how Pantera got started. Pantera is the only band I've ever been in, and at the start we used to play covers to make a living. Man, we played the clubs from seven, eight years, and yeah, I've played every fucking Van Halen, Iron Maiden, Ozzy, Metallica song under the sun! But it was very good training."

A band, of course, is invariably only as good as its lead vocalist and in Pantera's case, Phil Anselmo is something of a one-off.

"Phil was in a band in New Orleans doing basically the same thing as we were - playing covers but wanting to go in a heavier direction. We finally heard about Phil and he heard about us, we pulled him in and we jammed for two and a half hours and it was great!

"He just clicked, Phil moved down to Texas and we got stuck in the clubs man. We were trying to get our own shit together, our own sound and style, you know? After about three years, we landed our record contract."

It is popularly assumed that Texas boasts a blues club on every corner, and so it must have been difficult for a struggling metal outfit to gain an audience.

"Yeah, blues is mainly what Texas is known for and I understand that. But we were into what we were into, you know? And we made our audience. There's a metal scene in Texas too."

"I've always played Dean Guitars, man. I got a Dean catalogue when I was real young - I don't know, 16 or 17 years old, something like that - and I said, I want that guitar, that's the one, that's the fucking shit right there!

"I got myself a Pignose amp and a Big Muff fuzz and I was ready to rip. Now I'm using Randall amps; solid-state, not tube. I got a Burman PQ4 EQ, MXR six-band EQ, a Rocktron Hush unit and that's pretty much my rig."

A lot of guitarists would like to know how to get your guitar sound.

"Tell 'em to the get their own sound!" (Laughs)

Do you whack out some of the mid-range of your guitar signal in the manner of many a mega-thrash metal doyen?

"Yeah, it gets scooped out."

And what about the main track of Far Beyond Driven; Becoming?

"Vinnie had this real rad drum lick, almost like a fill-in lick that you do one time in a song, but he just keeps going on at it. I was trying to cut a riff to fit that and I was going for something erratic and so I used a DigiTech Whammy pedal. I was hitting a certain chord and hopping on the pedal to get a squeal out of it."

What about the filling out of the guitar sound on record. Is overdubbing a viable solution?

"No, if you listen to the record there is one guitar that's doubled. To get my sound in the studio I double guitar tracks and when it gets to the lead parts, the rhythm drops out, just like it's live. I'm very conscious of that.

"I make sure I'm not coming up with something that I can't reproduce live. There may be one or two moments on the record where the rhythm guitar is playing something else, but for 99 percent of the record it's real - straight out just like I'd do it live - just like an old Van Halen record! And that's what they sounded like live too!"

Is there a particular high spot on Far Beyond Driven which curls up Dimes's toes?

"Wherever the needle drops! I like it all from start to finish. I couldn't pick a track right now."

What about the solo on Shedding Skin? A bluesier edge than usual, we think...

"Oh yeah? That's cool. I could buy that. Some of the licks are more bluesy on that solo."

And the Black Sabbath cover, Planet Caravan: a major influence on Pantera?

"Absolutely! How that track came about was that we were going to do a track for the Black Sabbath tribute album that is coming out, but we cut the track and there was this conflict of interests between labels and we weren't able to put the song on the tribute album.

The guitar work on Planet Caravan sounds acoustic, in an electric kind of way, but on the other hand...

"That's because I used both. There are two acoustic tracks and two electric tracks."

An acoustic guitar? In Pantera?

"It wasn't mine. It was just whatever was lying around, man."

So we can call off any likelihood of a Pantera 'unplugged' in the near future?

What gauge strings did you use?

"We were experimenting and I think I moved up to a 0.46 on the big string. As for tuning, on some of the tracks we used regular tuning, but on others the whole guitar is tuned down to D. So now you know."

Finally, do you have any advice for aspiring young guitarists?

"Find someone who can jam on the skins, link up with them and rip out! Sit in your room just like I did and listen to the records of all the guys who are your heroes, learn their licks, learn all you can about it.

"Find someone you can jam with. That's a big deal. When you play with someone else, you gotta work together to get the thing started and in time, working and in the groove."