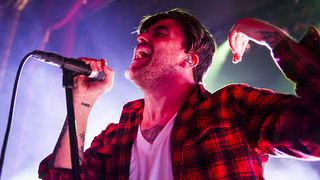 "It was really important for me to make this record in a studio," says Anthony Green, frontman for post-hardcore kings Circa Survive, of his emotionally charged and immaculately crafted third solo album, Young Legs. "All of my other records were done at a house, and they sounded a certain way. This time I was going for a warmer, more grown-up vibe. For some reason, being at a place where you're supposed to make records made me work harder."

In his early screamo days, Green would bang out records like he was running a sprint. For Young Legs, which focuses on reflective alt-rock and buoyant, acoustic-pop ballads, he took his time, working with producer Will Yip (who engineered Circa Survive's 2012 album Violent Waves) and frequent collaborators Tim Arnold, Keith Goodwin and Dan Schwartz (collectively known as indie folkers Good Old War) for a leisurely two months at Yip's Studio Four. "The record wouldn't have worked if I had rushed through it," Green says. "I didn't want to make a collection of songs. I wanted to make a real album, and that doesn't always happen right on the spot."

With a UK tour set top begin in Bristol on February 24th (click here for dates), Green sat down with MusicRadar to talk about Young Legs, his commitment to Circa Survive and what it feels like to make music as a dad.

Lyrically and thematically, do you approach solo material different than with Circa Survive?

The album is built more around the sounds of acoustic guitars and pianos. Was that intentional?

"Yeah. The idea going in was to build things around the piano and then to let everything else formulate around that. Strangely, I wrote pretty much everything on acoustic guitar; we translated it all to piano, bass and vocals. I wanted to make sure they worked in that structure because the sound of piano and vocal is so awesome; I wanted to make sure the songs could live in that place."

The song Stolen is reminiscent of Neil Young's Expecting To Fly. Do you hear that?

"Man that's crazy! I never would have thought of that. [Pauses] That's a very inspiring song, so… I was playing those chords for something like 10 years, singing it every once in a while. In terms of writing the song, I kind of left it the way it was."

Stolen and Too Little Too Late are both song snippets - they end way earlier than you'd expect.

"Yeah, yeah. Sometimes the idea comes out, and the more you formulate it, the more it becomes a real song. With other things, the more you do to it, the more it clutters the vocal point. I just wanted to see what these things were. If they were just snippets and vocal lines, that was fine. I didn't have to manipulate things into verses and choruses. That doesn't always work for me. Sometimes I just like a short blast."

Those songs reminded me of Guided By Voices.

The song Conversation Piece has a bit of a Pink Floyd vibe. I hope you don't mind all of these references.

"No, not at all. And Pink Floyd - wow! I've always been a huge Floyd fan. I never feel like the influence they have of me has been brought out, but this time I think it did. It's cool that you get that. I love Floyd."

It's been said that the song Breaker is about a destructive relationship. Can you expand on that a bit?

Some of your songs start out in one place musically and by the end we're somewhere totally unexpected.

"See, that's awesome! That's what I love, man. Songs have to be a journey. If you start a song out with one feeling and finish it up with another feeling, that's awesome. To me, that's an accomplishment."

How does Circa Survive feel about you doing solo albums? Are they cool with it? Is there grumbling?

"If they're not cool with it, they're not telling me. I get the feeling that everybody's pretty cool. And, you know, I'm 100 percent more devoted to Circa. I put more time into it creatively and emotionally than I ever have before. They would have zero reasons to feel threatened or bummed out about anything that I want to do on my own. Circa is bigger than anything I've ever done, and I believe in it more than anything else. I love playing these songs, and I love playing solo, but I will never leave Circa. The band will never break up. As long as I'm alive, there will always be Circa Survive."

Talk to me about working with Will Yip. You must have had a good experience with him on the last Circa record.

"Absolutely. Will is unbelievable. He's super-talented and positive. If I say, 'Hey, how can this sound like this or that?' he can make that happen. Having the type of dude that you can explain things to, things that might not make sense, is very freeing. It makes me feel like I can do anything."

What kind of acoustic guitar do you write with?

"I use a Martin. I've been using it for a few years. I sit down with no ideas or anything in mind, but I just start singing pretty melodies and things start to happen. I try not to overthink things or make them complicated. Once I get something that sounds good, I'm like, 'It's done.' I make things simple.

"Sometimes with Circa things get revised a bit. I have to take into consideration that it's everybody, you know? Sometimes that's good, sometimes that's bad. I don't think that more time spent on a song makes it better. I like the immediate thing."

In the song Young Legs, the piano is very dominant, and the guitar comes in as crashing waves. Was that the idea?

"Yeah, that's cool! Originally, I didn't even want guitar in the song. But Dan from Good Old War wanted to try a couple of things. He manipulated the sound in a very cool way. I like it."

You really like working with Good Old War. This is the third record you've done with them.

"I've been friends with Keith and Tim my whole creative life. When I started listening to punk rock and going to shows, I went to see their band. They were in high school and they were making music, and my band would play with theirs. We all knew each other, and we're friends. We like the same kinds of music. Having them with me in the studio was great. It felt really right."

Has being a dad changed the way you write?

"Yeah, absolutely. People have asked me if being a bad has changed me, and… yeah, it has. You don't always want to admit to that, but everything changes you, especially something as important as being a father. You go to college and get changed - you're a different person. I'm not the same person that I was when I started making music.

"And I'm not the same guy I was when people started liking my music. The fact that they've followed me and have grown up with me, when I made the change from hardcore to more rock to whatever it is, it's a huge honor for me. I'm extremely grateful for my fans. It's insane. It's insane to be a dad and to have two kids and to be making music for a living. I never thought this would be possible."