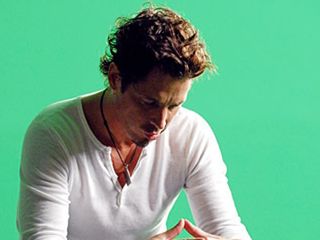 Cornell co-writes a song with an important message

Chris Cornell recently co-wrote a song with a fan. Called I Promise It's Not Goodbye, the story behind the track is quite extraordinary.

Texan fan Rory de la Rosa lost his six-year-old daughter Ainslee to cancer last year. Shortly afterwards, he himself was diagnosed with the same illness. Rather than losing himself to despair, however, de la Rosa reached out to Cornell to tell him how much his music impacted his life and of the bond it helped create for him and his daughter.

Through a caregiver at de la Rosa's hospice, the two succeeded in contacting Cornell via the internet.

"I have had a friendship with him by telephone and e-mail for a while now," says Cornell. "I was made aware of his story and that he wanted to talk to me because my music had been important to him and his family through what I think of as an unimaginably hard time.

"After speaking to him I knew we would stay in touch. I think he is an extremely brave man and has been nothing but a gentleman in every conversation we have had, never once complaining even when I know he may be having a bad day.

"To the contrary, he has sent me messages that have lifted my spirit at times when I was down and without knowing, reminded me how trivial my few troubles really are. What he did to lift my spirits the most was to send me his poem. What I read gave me such a sense of relief that Rory had an insight. A strength and hope that was inspiring beyond measure."

A poem becomes a song

De la Rosa sent Cornell a poem called I Promise It's Not Goodbye, and Cornell was so moved that he turned it into a song. "It was a pleasure to put it to music and an honor that he ask if I would ever consider it. It was with his permission that I posted it for people to listen to."

To download a free MP3 of I Promise It's Not Goodbye, visit Chris Cornell's official website. Cornell does ask, however, that you will consider making a donation in memory of Rory's daughter Ainslee and to help ease the financial burden of Rory's disease.

In our opinion, it's one of the most memorable tracks Cornell has ever recorded. Be sure to check it out. Also, give a listen to MusicRadar's exclusive podcast interview with Chris Cornell.