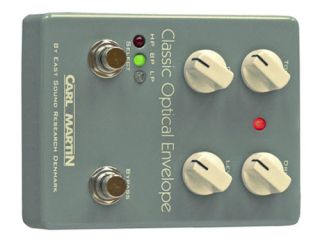 Carl Martin has added a new duo to its stompbox lineup: the Classic Optical Envelope and the Blue Ranger. As the name suggests, the former is an envelope filter for guitar and bass with a few extra options (see below). The latter is a Stevie Ray Vaughan-inspired Texas overdrive 'capable of crossing the border into fuzz territory with the gain full out'.

Back story and press blurb below. No prices yet - see Carl Martin for more.

"Carl got a call from an old guitar playing friend who said he didn't want to use his wah all the time, but wanted to have some of those effects available.Enter the Classic Optical Envelope… essentially a classic envelope filter (auto-wah utilizing the same opto-technology as the Opto-compressor) for guitar or bass, with a bunch of cool options.

"The first footswitch is for fx on/off (buffered), and the second to select between the three modes (High Pass, Band Pass and Low Pass).Add to this the Level control for overall volume, Drive for how hard the auto-wah will function, Q for adjusting the size of the bandwidth, and Tone which acts as a separate Hi-pass filter, and you have complete control over your fx… from vocal like tones to funky quacks and fat wows!

"Housed in the cool new diecast housing with mini-knobs and cool retro colour, the Classic Optical Envelope can be powered by a 9v battery, but we always recommend a regulated power supply for optimum response!"

"While staring at Stevie Ray's statue in Austin, Carl decided to add a Texas style overdrive to the Vintage lineup.Equally suited to single coils or humbuckers and with a True Bypass Switch, the Blue Ranger also incorporates a 'dual-clip' circuit to keep the sound un-muffled and clear at all levels.

"The overly simple controls (Level for overall volume, Gain for the amount of overdrive, and Tone for fine tuning your sound) quickly take you from big open Hendrix-y chords to saturated SRV type leads, and beyond!

"The Blue Ranger will actually cross the border into Fuzz with the Gain full out. Housed in the cool new diecast housing with mini-knobs and cool retro colour, Blue Ranger can be powered by a 9v battery, but we always recommend a regulated power supply for optimum response!"