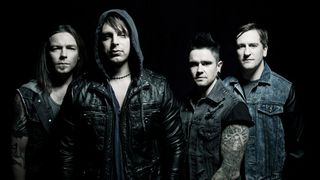 Welsh metallers are aiming for the big leagues with new album

As they prepare to drop new album Temper Temper, another hit could propel them into metal´s major league. We got on the phone to lead player Michal ‘Padge´ Paget to find out all about this potential career maker.

How did Temper Temper come together?

“The main chunk of the album was worked on in Thailand and then Cardiff, then Rockfield and then [back to] Cardiff. It was here there and everywhere. It was a mish mash of a lot of things. Initially Matt [Tuck, guitar and vocals] and our drummer Moose flew to Thailand to start the album and give us a foundation for the album. They came back with a bunch of ideas and some drums and guitars recorded. Then they were sending files to me so I could work on stuff at home, then I was sending files to them so they could check out my ideas. A few ideas came out of that file sharing and a bunch more recording was done in Wales.”

Did that make it a disjointed writing process?

“Fortunately for me I´ve got a studio in my garage. If the lads didn´t like something I could go in there and change it up. It was a mish mash but it all came together. For me I had been writing and recording for the month prior to going into the studio so I had a load of ideas ready to go. The riffs were sorted, it was just the leads because I needed to hear what I was playing over. Until I had those tracks I was in limbo and didn´t know what was happening.”

Were there plenty of late nights in the home studio?

“That´s one of my weird disorders, I like to lock myself away in there and really get creative. It´s so convenient to have that space at home.”

Did having your own studio enable you to experiment a little more as you weren´t on the clock?

“Absolutely. It was really good this time around. It´s our fourth album so it´s time to do something I hadn´t tried before lead wise. Just getting into the neck and seeing what I could do.”

Which guys were inspiring you this time around during writing and recording process?

“I spent a bit of time with Gus G last year. I put on a Firewind record and started messing around with the solos. He´s got a great style, he´s got his chops down. A little bit of Gus was thrown in there. There´s a little bit of Synyster Gates as well.”

Do you feel like there has been progression in the band´s sound on Temper Temper?

“Definitely. All the guys are happy with their parts. We didn´t want to change but we wanted to try a new vibe. We all delivered, there´s something really fresh about this record. There´s some classic Bullet with heavy screaming, double kicks, breakdowns, quick solos, I don´t know why we didn´t release one of those [songs] first!”

The songs that have been released so far, Temper Temper and Riot, definitely still have that classic Bullet sound, was that a conscious decision?

“We didn´t want to step too far out of our comfort zone and alienate too many fans. For a maturing band we just wanted to try something different. We haven´t strayed too far away on any other album, I think it was a brave move but we all thought it was time to try something new.”

Of course, Matt has recorded and toured with AxeWound, do you think that had and impact on the sound of Temper Temper?

“No, I don´t think so. In all respect to Matt he did the AxeWound thing but he concentrated more on making that different as opposed to Bullet so that we could retain everything. With him being the main songwriter for Bullet he could keep all the good stuff for Bullet. I think he purposefully went out and did something mad to get some of those niggles out of him. I think he´s very conscious of not getting close to Bullet on the AxeWound record.”

Were you teaming the Les Paul with the Peavey 6505 again this time?

“For rhythms it was the Les Paul Raw Power and the Peavey 6505. For leads I used the Raw Power and a Laney amp. I´m not quite sure of the model. The Peavey was good but the Laney just seemed to have the edge on the lead.”

What is it about the Les Paul/Peavey combo that has worked so well for you?

“That´s a combination we´ve used for the last two records and this new one. The guitar holds itself together, sometimes it´s very difficult to get a guitar that stays in tune and every note rings out, it´s a perfect guitar in studio conditions. It seems to have the edge on most of our combined guitars and between me and Matt we´ve got a few. The Peavey just adds to the combination, when they´re paired together they just make so much sense. You add a TubeScreamer in and that´s just the icing on the cake.”

Did you try experimenting with your sound in the studio?

“Big guitars are very prominent in all of our records. We tried new amps in our rehearsal space but you always end up going back to the one that feels right. We probably tried the Laney in Thailand for rhythms but went back to the Peavey, we always do.”

Riot is the new single, is that a fair representation of the album?

“Honestly, the first two tracks that have been released are the different tracks where we stripped down the fat, choppy rock songs under three minutes. Personally I wouldn´t have released those tracks first. From a fan point of view there´s much better stuff to come with the album. There´s loads of melodies on there. There´s not too many ballads this time but just nice tempo rock metal tracks with the classic Bullet sound.”

Is this the band´s strongest album yet?

“I think we all think it´s a very strong album. We´ll have to wait and see how well it is received. Going on what people have said so far we´re all hopefully it´ll go well. I think more so this time because we stepped out of comfort zone and I tried something new. When you hear it all together on the album it sounds great, I´m happy with it and it´s nice to see how we have progressed and how well we´ve progressed as musicians.”