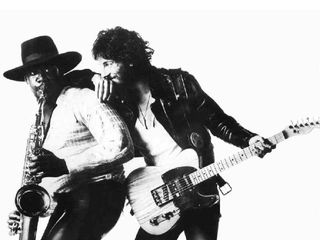 "Clarence doesn't leave the E Street Band when he dies. He leaves when we die."

Bruce Springsteen has posted his eulogy for Clarence Clemons. The E Street saxophonist died on 18 June, a week after suffering a stroke. Here are excerpts from Springsteen's text, which he delivered on 21 June in Palm Beach, Florida.

FOR THE BIG MAN

I've been sitting here listening to everyone talk about Clarence and staring at that photo of the two of us right there. It's a picture of Scooter and The Big Man, people who we were sometimes. As you can see in this particular photo, Clarence is admiring his muscles and I'm pretending to be nonchalant while leaning upon him. I leaned on Clarence a lot; I made a career out of it in some ways.

Those of us who shared Clarence's life, shared with him his love and his confusion. Though "C" mellowed with age, he was always a wild and unpredictable ride... My pal was a tough act but he brought things into your life that were unique and when he turned on that love light, it illuminated your world. I was lucky enough to stand in that light for almost 40 years, near Clarence's heart, in the Temple of Soul.

So a little bit of history: from the early days when Clarence and I traveled together, we'd pull up to the evening's lodgings and within minutes "C" would transform his room into a world of his own. Out came the colored scarves to be draped over the lamps, the scented candles, the incense, the patchouli oil, the herbs, the music, the day would be banished, entertainment would come and go, and Clarence the Shaman would reign and work his magic, night after night. Clarence's ability to enjoy Clarence was incredible. By 69, he'd had a good run, because he'd already lived about 10 lives, 690 years in the life of an average man.

Every night, in every place, the magic came flying out of C's suitcase. As soon as success allowed, his dressing room would take on the same trappings as his hotel room until a visit there was like a trip to a sovereign nation that had just struck huge oil reserves. "C" always knew how to live.

Clarence could be fragile but he also emanated power and safety, and in some funny way we became each other's protectors; I think perhaps I protected "C" from a world where it still wasn't so easy to be big and black. Racism was ever present and over the years together, we saw it. Clarence's celebrity and size did not make him immune. I think perhaps "C" protected me from a world where it wasn't always so easy to be an insecure, weird and skinny white boy either. But, standing together we were badass, on any given night, on our turf, some of the baddest asses on the planet.

Together, we told an older, richer story about the possibilities of friendship that transcended those I'd written in my songs and in my music. Clarence carried it in his heart. It was a story where the Scooter and the Big Man not only busted the city in half, but we kicked ass and remade the city, shaping it into the kind of place where our friendship would not be such an anomaly. And that... that's what I'm gonna miss. The chance to renew that vow and double down on that story on a nightly basis, because that is something, that is the thing that we did together... the two of us.

Clarence doesn't leave the E Street Band when he dies. He leaves when we die.

So, I'll miss my friend, his sax, the force of nature his sound was, his glory, his foolishness, his accomplishments, his face, his hands, his humor, his skin, his noise, his confusion, his power, his peace. But his love and his story, the story that he gave me, that he whispered in my ear, that he allowed me to tell... and that he gave to you... is gonna carry on... So I won't say goodbye to my brother, I'll simply say, see you in the next life, further on up the road, where we will once again pick up that work, and get it done.

Big Man, thank you for your kindness, your strength, your dedication, your work, your story. Thanks for the miracle... and for letting a little white boy slip through the side door of the Temple of Soul.

I'm gonna leave you today with a quote from the Big Man himself, which he shared on the plane ride home from Buffalo, the last show of the last tour. As we celebrated in the front cabin congratulating one another and telling tales of the many epic shows, rocking nights and good times we'd shared, "C" sat quietly, taking it all in, then he raised his glass, smiled and said to all gathered, "This could be the start of something big."

To read the full text of Bruce Springsteen's eulogy, visit his official website.