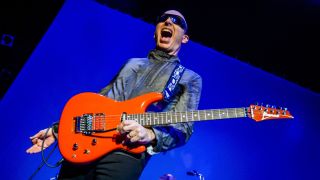 Introspection isn't Joe Satriani's default mode. Since releasing his 1986 full-length debut, Not Of This Earth, the guitar star has moved at an astonishing pace, issuing 14 solo guitar albums of dramatic, game-changing music without so much as a single gulp for air. He even called his last LP Unstoppable Momentum, the title of which had more to do with his ceaseless drive and restless nature than his fleet-fingered skills on the fretboard.

But over the past two years, the guitar star has been immersed in two retrospective projects that are both seeing the light of day within weeks of each other: The first, Joe Satriani: The Complete Studio Recordings, out today, is a sumptuous 15-disc box set from Sony/Legacy, that packs all of Satch's newly remastered studio albums (along with an extra CD, Added Creations And Bonus Tracks) into one glorious package.

Due out on May 6 is Strange Beautiful Music: A Musical Memoir, which Satriani co-wrote with Jake Brown (the book includes a forward by Queen guitarist Brian May). Both projects were journeys of self-realization to varying degrees. Speaking of Strange Beautiful Music, a richly detailed album-by-album account of his career thus far, Satriani tells MusicRadar that "writing the book was very cathartic for me. There were weeks where I would walk around with a lump in my throat, feeling very emotional about the stories I was working on. The moments of revelation came from reading the interview transcripts from my friends and studio mates as they would comment on what it was like to work with me. 'Was I really like that?' I would ask myself… I guess so."

With regard to how compiling the box set differed from the book project, Satriani explains, "With the music it's listening with not only your ears but with your heart, and by trying to discern whether or not you're getting it right with the remastering." Adding that he's recently finished 10 song demos that he sent to his Chickenfoot bandmate Sammy Hagar, Satriani says, "It's time to make some new music. [As for the box set and the book], I'm very happy with the end results but very glad they're done."

In an excerpt from Chapter 6, presented below, Satriani discusses the beginnings of Not Of This Earth.

You can pre-order Strange Beautiful Music: A Musical Memoir at BellaBooks.

Joe Satriani: The Complete Studio Recordings can be ordered at Amazon. It is also available as an Exclusive "Chrome Dome" USB Version at Satriani.com.

Additionally, you can pre-order the "Chrome Dome" USB Version in a bundle with Strange Beautiful Music: A Musical Memoir (due out May 6) - both autographed by Joe himself - at Satriani.com. Save $20 by pre-ordering both today.

All pre-orders of the bundle at Satriani.com include an instant delivery of an exclusive MP3 download of the re-mastered Crush Of Love and also an exclusive excerpt from the book (in PDF format).

Leading up to that time in the mid-eighties, I was always thinking that I would be lucky to be like a Jimmy Page-type figure in a four-piece rock 'n' roll band, with the singer being one of the quarter. That classic rock-band model had always made sense to me, and as I got older and more honest with myself and my abilities, I began thinking that that's where I could thrive the best. I knew I could write - I was prolific - and I liked working with vocals-oriented rock music. The music I listened to over and over again, year after year, was made by bands pretty much like that: these three-, four-, and five-piece bands, guitar/bass/drums/singer, maybe a keyboard. So that's what I kept working on. It really wasn't until after I did with record with Jeff Holt that I started thinking there was any hope of playing instrumental music professionally.

John Cuniberti: With Joe, we've always seen that he has a rhythm section, then a melody guitar - and it can have harmonies or not, usually a harmony to the melody would happen at some point. And that could be a two-part, three-part, or even five-part in some cases. Then there's what we'd call the solo sections, and we always saw those three things separately. It's not unlike a pop song where you have your rhythm section, you have your lead singer, and then your soloist. So the records have always been constructed in a very similar manner. In other words, when Joe says to me, "I'm going to do a rhythm guitar part," I know what that means - it doesn't mean a solo or melody part. And when he says he's going to do his melody, I know it doesn't mean a solo; it's what someone would sing if there were a singer. It's what's played during the verse and what is played during the chorus, and what might be played during the bridge - it's the melody line. So he could take his guitar and make a full band out of it.

I arrived at that evolution in my sound after I recorded the EP, which I felt was more of an experimental calling card. In other words, I have to make that record just to show people how artistically odd I was, that I wasn't just the professional pop-rock guitar player that had been gigging around town with the Squares. And because there was no outlet where I could do that music, the only way I could do it was to record it, send it out, and see if there was someone out there who would respond to it. Even then, I wasn't thinking about replacing vocals with my guitar playing - I was writing serious, original guitar music. It really wasn't until I saw a review of the EP in Guitar Player magazine that I caught a glimpse of my musical future.

This was when I was selling the EP out of the trunk of my car, and there were maybe fifty copies floating around, so I had no real idea who it was reaching. That changed one day when I was at a rehearsal with a band I'd been playing with following my exit from the Squares, and I remember our bass player, Bobby Vega, came in with a copy of Guitar Player, handed it to me, and said, "Hey, you're in this magazine," which was a little surreal. I remember as I read the review, they were talking about this guy, Joe Satriani, who they thought was one of the strangest, most avant-garde guitar players they'd ever heard. Once I read it, I realized they didn't know who I really was. They thought I was some obscure musician, somebody new on the scene. They had no idea I was Joe, formerly of the Squares and now struggling to find another band to play with.

That's when I knew I wanted to be that guy they were talking about. I wanted to be that odd, new guitar player. I saw a glimpse of my future, and said to myself, "You've got to figure out a way to be 'that guy.'" So I quickly left that group I was playing with and decided I had to figure out a way to make a record with real bass and drums, because my EP could only get me so far. That really was the next step in putting together what would become Not Of This Earth. The challenge was how to maintain my odd sense of tone, harmony, and melody, while bringing in the elements that people relate to - drums, bass guitars, and keyboards, playing together like a band.

Before I recorded the EP, Steve Vai and I had been communicating with each other regularly. He was still sending me these odd tapes, just some of the most bizarre recordings of the stuff he was making in L.A., where he was becoming a composer, learning all about recording on his own, and actually becoming the Steve Vai that we all know. He'd been up to see the Squares, and thought it was fascinating and yet strange that I would be in a band like that, because he knew my other self.

Steve Vai: I would send much of this stuff to Joe. Stuff that I would not dream of letting anyone else hear. Tons of stuff that, to this day, he may be the only one who has. It was all obviously very crudely recorded with little real production value or time spent on things to make it actually sound good.

I had all this unusual music in me, and now there's this magazine review, and they have no idea that I'm this struggling guitar player here in San Francisco. They think I'm a successful nut job who's at home in his studio creating this odd music, and the outside world actually thinks that's who I am, because it's written down in this magazine. And the review was actually quite favorable, too!

John Cuniberti: Honestly, at first, I'd been terribly disappointed when the band broke up. It was like, "God, after all that work…" Because we had recorded nearly two albums' worth of material, and there were a couple of trips to L.A. for showcases, but they could never get themselves a record contract, so after a while everything just dissolved. So when Joe's band broke up, he went about his way and I went about mine. I was making records with other people, and I didn't see Joe again for at least a year and a half to two years, and he was teaching and did his first solo EP with Jeff Holt, which was an all-guitar-based recording.

Once I had John in place as engineer/coproducer,I realized I needed to bump up the budget. After I'd formulated this idea for the record, I assumed that I could get what they used to call a "spec deal," where you go to a studio, they front you the time to record, and then - and this is right out of the film Boogie Nights - when you get a recording deal, you pay everybody back. That was a very naïve way of looking at things, but I had so much confidence in it even though John was of course the first guy to tell me, "Are you out of your mind? Nobody is going to front you money for instrumental rock, it's not even a genre anymore!" And he was right.

I remember returning home from that discussion feeling quite deflated, worrying that I'd never get this project off the ground. By some stroke of fate, the next day I got a credit card in the mail, preapproved with a $5,000 credit limit. This was the eighties, when banks all over the country were sending out preapproved credit cards to total strangers. I probably qualified because I'd been successfully paying off the van we'd purchased so I could drive the Squares around.

They didn't know that in reality I was a broke musician. The letter said something like, "Joseph Satriani, because of your good standing in the community, we're giving you this credit card and it comes with $5,000 worth of checks." So I took that checkbook to John and said, "What if I paid you up front, what kind of deal would you make for me?" So John worked out this deal where I would pay him and the studio up front, and I wrote $4,700 worth of checks to the studio that day so I could get Not Of This Earth recorded.