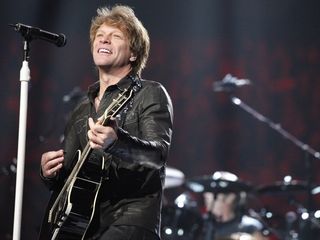 Bon Jovi opened the New Meadowlands Stadium in New Jersey last night (26 May), and despite the oppressive, 86-degree heat, the crowd of over 80,000 fans partied throughout the 26-song set.

It was the first-ever concert at the brand-new, $1.6 billion facility, and the opening night of what will be a three-night stand. (The group returns in July for yet another sold-out show.)

The crowd, many of whom were tailgating since early afternoon in the parking lot, roared its approval. And with that, the band launched into their 1986 smash You Give Love A Bad Name.

Twelve songs into the set, Jon told the audience, "It's a good thing there isn't a roof on this place. I'd be about blowing it off."

Later in the night, he brought guitarist Richie Sambora out on the runway, where they performed a duet of I'll Be There For You. "It's 21 years ago we played the stadium across the parking lot," Jon said before the song. "To think that we're still standing after three decades of this is pretty darn good."

Not many acts can fill an 80,000-seat stadium for one night, let alone three. Interesting to think that two of them (another goes by the name of Bruce) hail from New Jersey.

In June, Bon Jovi are set for another enormously impressive run, a 12-date residency at London's O2 Arena.