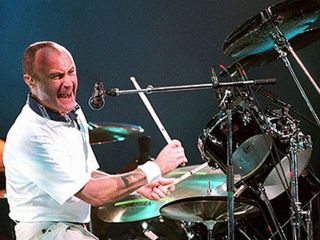 Take a look at me now, while you still can

For some - no, make that a great many - hating Phil Collins is a full-time obsession. There are I Hate Phil Collins web communities, MySpace pages, blogs, you name it. There's even a quiz in which you test your level of Phil Collins hate. In a variation of the latter, a friend of mine used to question girls before he dated them in order to weed out potential Phil Collins-loving mates. (He's now married to a lovely woman who adores old-school New Kids On The Block, proving that love is both blind and deaf.)

Regarding Collins, that a man who has sold upwards of 100 million records can inspire derison of such effusiveness (and inventivenes) is somewhat astonishing - until you consider the fact that he made it relatively easy, especially during the zenith of his mid-'80s career, when his potato face and retreating hairline were on perpetual display on MTV, Miami Vice - hell, I think he turned up on Meet The Press a few times, and I still have no idea why.

There were, of course, the ballads, some of them great but most of them utter turds. It was almost as if he was begging for a good cock-punching. And even when he chose to rock, he had become a shameless, smirking show hog - the capper being his I-Will-Now-Grace-Every-Act-With-My-Presence ego display at 1985's Live Aid. (I recall - don't ask me how - playing a Live Aid drinking game in which my friends and I had to down a shot every time Collins appeared with a new act. By midday, we were flat-out useless. Thanks, Phil.)

And so, with the recent news that Collins has decided he really must be going, that he is retiring from live performing and recording (although he insists he'll still write), the question is this: Who on earth will really miss him?

Fergie, for one - as a 10-year-old she appeared on TV singing the lamentable Sussudio. She even refrained from peeing in her pants, an obvious sign of respect. Then there's rappers like Ol' Dirty Bastard and Lil Kim, both of whom brought Phil some much-needed cool when they reworked Collins's tracks on the 2001 compilation album Urban Renewal. Gorillas and ad men will mourn the passing of Collins's career, but as long as there's tracks to license, they'll find the strength to soldier on.

But the real truth is, drummers will miss Phil Collins. Before he fell victim to schmaltz, he routinely turned in powerful, priceless star-turns of drumming prowess. Take, for example, his playing on Apocalypse in 9/8 from the epic composition Supper's Ready (on the 1972 Genesis album Foxtrot). During a meter of 9/8, with the bass and guitar holding down a repeated accent pattern, Collins solos fluidly in a manner that is neither stiff nor mathematical. Likewise, on Los Endos, from Genesis's 1975 album A Trick Of The Tail, Collins plays a hyperspeed salsa-pattern (think Santana after too many Red Bulls) and lays down some blistering paradiddles.

As a floating member of the famed jazz-fusion outfit Brand X, Collins could be counted on for fiery and clever performances, most notably on the Billy Cobham-inspired cut Nuclear Burn, from the 1975 album Unorthodox Behavior. But it was on Peter Gabriel's third solo album, released in 1980, on the song Intruder, that the now-notorious Phil Collins "face hugger" drum sound was born. As per Gabriel's instructions, there were no cymbals nor hi-hats, and the thunderous, heavily gated drums were pushed to the front of the mix. Collins was so taken with the effect that he used it on his breakthrough solo hit, In The Air Tonight.

And what of that song's famous drum fill? Surely, Collins spent days, weeks, even years perfecting such a sequence, right? Wrong. "I never planned to have a big fill at that point in the song," he revealed recently. "I just wanted the drums to enter. Well, after I did about five takes of the tune, I started to get a bit more adventurous, and on the sixth take that fill happened to come out. While I liked the fill, it was really the rest of the take that sounded very good, and that's why I kept it. So that whole thing - one of the most important parts of the song, really - happened by accident."

Here's hoping that Phil Collins gets back behind the drum kit and has more accidents like that one. But please, no more Sussudio.