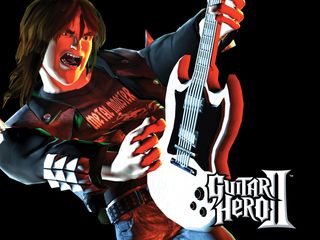 Guitar Hero. It's a game. Remember!

I read a headline this morning which jogged my interest, 'Science Center to open guitar lounge'. Great, I thought, a display for new people to learn how one of the world's most popular instruments actually works. You know, in scientific terms.

The Carnegie Science Center in Pittsburgh is in fact opening a Guitar Hero Electric Lounge, which will let "aspiring rock stars try out the stage at a concert-quality venue."

From 8pm to midnight every Saturday in February and March, the Center's Works Theater will be "transformed into a rock concert venue where gamers can play their favourite songs from the game head-to-head with another guitarist. The Guitar Hero Electric Lounge features eight giant screens, a concert-quality sound system, and special lighting effects", officials say. Entry is $8.

I shouldn't be annoyed by this, but I am.

For a start, people who play Guitar Hero aren't 'guitarists' (unless they also play guitar). They are gamers.

What will they learn about science from just playing Guitar Hero? Apart from maybe how easy it is to get RSI?

The Carnegie Science Center should be embarrassed. And at least change their name for these weeks to Carnegie Games Arcade.

I'm with Noel Gallagher on this one. As he recently told MusicRadar's sister title Total Guitar:

"When I meet kids, I always tell them playing a guitar is not a f***ing video game, there is no level to get to. You'll never master it and you'll never complete the game."

But if it's a real guitar, you may end up learning a lot more than you will by just playing Guitar Hero.