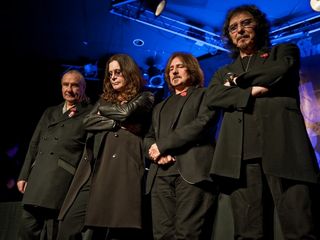 The reunited Black Sabbath have announced an intimate warm-up show at the Birmingham O2 Academy on 19 May ahead of their scheduled Download 2012 headline slot (10 June).

There's still no word as to whether original drummer Bill Ward will be joining his fellow pioneering metallers at the 3,800-capacity venue or at the later festival date, but the band have not yet announced a replacement.

Ward fell out with the band after he disputed his reunion contract, deeming it "unsignable" and both camps appear to have fallen silent on the matter for the time being.

The other worry for Black Sabbath fans will be the health of guitarist Tony Iommi, who has been battling cancer for the last four months.

According to posts on Iommi.com, the guitarist should now be coming to the end of a three-week course of radiotherapy treatment, but it's yet to be revealed whether or not the disease is in remission.

Most of the previously announced Black Sabbath tour dates have now been rescheduled as 'Ozzy and Friends' shows in order to allow the metal legend time to recuperate.

Tickets for the show are priced at £45 and are set to go on sale at 9am (BST) on Friday 4 May via Ticketmaster.co.uk and LiveNation.co.uk.