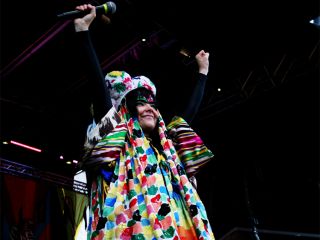 Epic minimalists Sigur Rós were recently joined onstage by fellow Icelandic export Björk at Náttúra festival - a free outdoor event in Reykjavik to raise awareness of aluminium smelting plants ruining the landscape. The event attracted 30,000 people, which is 10% of the country's total population.

Those lucky 10% witnessed what can only be described as 'Björk whacking some congas' during Sigur Rós' Gobbledigook. You can watch a fan-posted video of the collaboration here.

Sigur Rós vocalist Jón Thor Birgisson spoke about the smelting issues at hand: "We are not a political band and don't think musicians should set themselves as spokespeople on anything at all, but sometimes you see things going on in your own back yard and find that just as a human being you cannot stand by and do nothing".

Björk had this to say: "Too often battles being fought for nature turn into something negative and into mudslinging. We will not go that way, we are not saying that this and that is forbidden, we are rather asking 'what about all these other possibilities?' The 21st century is not going to be another oil century but rather a century where we need to recycle, think green and design both power plants and our surroundings in harmony with nature."