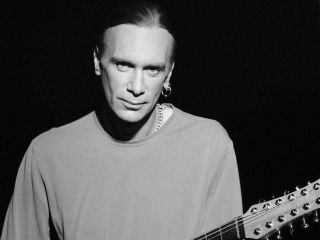 Sheehan has a solo album out in April

Just days after confirming the reformation of Mr Big exclusively to MusicRadar, bassist Billy Sheehan has announced details of a new solo album.

Holy Cow! Is Sheehan's third solo album, and is released by Mascot Records on 14 April.

As well as playing in Japan with Mr Big, Sheehan plans a solo tour to promote the album.

The full Holy Cow! tracklisting is:

1. In A Week Or Two (I'll Give It Back To You)
2. Dynamic Exhilarator
3. A Lit'l Bit'l Do It To 'Ya Ev'ry Time
4. A Bloodless Casualty
5. Make It To Another Day (I Keep Rolling On My Way)
6. Another Broken Promise
7. Just Another Humanoid
8. Turning Point
9. Two People Can Keep A Secret (If One Of Them Is Dead)
10. Theme From An Imaginary Science Fiction
11. Cell Towers