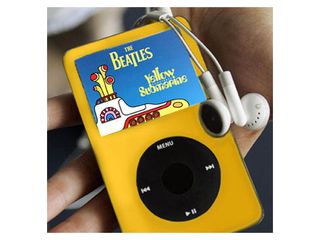 There's 'limited edition', 'special collector's edition', and 'could auction it at Sotheby's edition'. The definition gets blurry as New York department store Bloomingdale's announces it is coming out with a Beatles iPod, loaded with every song from the Fab Four's catalog.

Here's the thing: they're only making 100 of them.

The Beatles iPod will be part of a series of Fab Four merchandise this summer from Bloomingdale's, which has acquired the rights to the group's images from Apple Records (The Beatles' record label, not the computer company). In addition to the iPods, there will be t-shirts, jackets and accessories that bear images from posters and album artwork.

The iPod - beyond the fact that there will only be 100 of them - is interesting though, as The Beatles' catalog currently remains unavailable on iTunes.

Could this be the first true sign of a merge between The Beatles and Steve Jobs? Stay tuned.