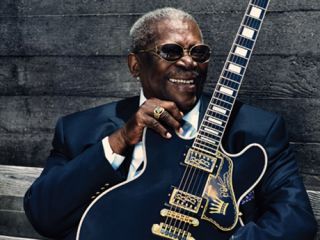 BB and his beloved Lucille

It's been three years since BB King last sat hunched over his beloved Gibson Lucille on UK stages, when he was supposedly performing his 'Farewell Tour'.

After an unparalleled career spanning more than half a century, it seemed the 80-year-old Beale Street bluesman was finally calling it a day.

The cotton fields of Indianola and the 300-gig-a-year grind of the 'chitlin' circuit were all far behind him, but BB's punishing tour schedules would make a man 40 years his junior think about getting some early nights.

Still, it's clear that the Chairman Of The Blues Board isn't aiming to hang up Lucille yet. He added his increasingly regal presence to Eric Clapton's 2007 Crossroads Benefit, rocked out alongside John Mayer at the 2008 Grammy Nomination Concert and brought the rafters down at the 2008 Chicago Blues Festival.

Then there was the release last year of One Kind Favor, a visceral collection of rhythm'n'blues songs that explored the byways and backwaters of BB's early days, and turned out to be his finest release in years.

England has always enjoyed a special place in BB's affections, and he's never made any secret of the debt he owes to Eric Clapton for name checking him back in the 1960s.

A return was inevitable. According to BB, "I decided that I would come over because I miss coming to Europe, I'm feeling well and I wanted to come back and see you guys one more time."

All the better for us.Time for an audience with the man himself…

How did your last release One Kind Favor come about?

"The album was produced by T-Bone Burnett, and his idea was to record some of the sounds that would have been heard on the radio back when I was starting out, and then have me do them my way.

"When we first got together to talk about the project, he wrote down about 20 songs that he liked and then had me do the same - we came up with what you hear!

"We just thought it was a good time to do them, and a good try if it didn't work!

"I had Dr John playing piano, we've recorded a lot together - he's always a treat to have around because he's got a natural style."

From your earliest days back in Memphis when you recorded She's Dynamite with Sam Phillips, you've made a point of covering old songs. Do you do it in any conscious sense to keep the blues tradition alive?

"No, I never even thought of that. She's Dynamite was a 100 years ago and I recorded that song because the company thought that it was a great song and it was hot.

"A lot of people think that Sam Phillips [legendary rock'n'roll producer] produced some of those records but he had nothing to do with the choice of songs, he was just the engineer.

"At the time I was with the Bihari Brothers on RPM [founders of Modern Records in LA, and RPM, Flair and Meteor records in Memphis].

"They'd tell the studio that any time their artist was in town and had something to record, let them work in their studio and send them the bill.

"That's the way Sam Phillips was with the people I worked with, all he did was make sure it was on the tape properly.

"But everything I record I just try to sound like me and come up with songs that suit what I do, and then just go for it.

"I never know what the public's going to like anyway."

Do you find it frustrating that a lot of people who hear you this time around, perhaps only associate you with the BB King they heard playing with U2 or singing Thrill Is Gone?

"I'd be a fool if I didn't, but then I've never been lucky getting airplay. In 1951 the Bihari Brothers sent me a telegram telling me that I'd sold 100,000 copies of Three O'Clock In The Morning.

"Although that made me pretty happy, I knew even back then that it was the airplay that had sold that record.

"The only other time I was really helped was with Thrill Is Gone, all the other tunes I recorded may have sold as many or gone over well, but I know never got radio coverage.

"The problem is that a lot of the blues stations are late on Saturday night and like a lot of people, I ain't no vampire!"

A sharply-attired BB plays Thrill Is Gone. Wot no cymbals?!

Do you still feel that some people think Blues guitar is a poor relation to jazz? You once said that you practised all the time trying to put jazz inflections into your own playing…

"I don't practice trying to play jazz these days; in the early years I used to have tutors from my band help me play jazz tunes just so they could make it easier on themselves.

"All my band are still better musicians than I am! I like jazz, rock 'n' roll, some hip hop - I can't think of any music I don't like.

"I don't care for the music when they're talking bad about women because I think women are God's greatest gift to the planet - I just like music."

Old photographs of you show you holding a whole range of guitars, everything from a Fender Stratocaster to one of those big Gibson Switchmaster models. Bearing in mind that a lot of those models were only just being made back then, were you always a sucker for a new guitar?

"Not really - I was just a sucker for any guitar I could get and manage to hold on to! I was from the country and we didn't have money like people did in the towns.

"You could save and save, but still rarely get enough money to buy a nice guitar.

"I bought my first electric guitar when I moved to Memphis; a Gibson with a DeArmond pickup which I used with a small Gibson amplifier.

"But sometimes they'd get busted up, people would steal 'em and one time I even had a car wreck when an 18 wheeler ran into the back of me.

"At least that time I had a chance to get a new guitar on insurance."

One last time… BB on why Lucille is called Lucille

I know that you were always impressed by your cousin Bukka White - did you ever try playing steel guitar?

"I grew up hearing that Delta style but I could never play like Bukka or anyone else! I wanted to play like Lonnie Johnson, Blind Lemon Jefferson - even Jimmy Rogers did things I liked.

"I loved Django Reinhardt as well, but when T-Bone Walker came up with that single string playing on the electric guitar, that did it - I went crazy.

"I've been criticised for it and even read recently that I played 'watered-down blues'. Well if they think that they can - I don't mind, I just do what I do!"