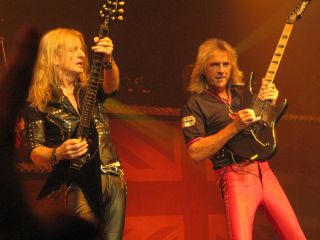 As you no doubt know, MusicRadar is getting ready to crank it way past 11 with what will be the loudest seven days ever: Metal Week. And who better to interview than two axe men who have helped raise fists and devil's horns the world over? That's right - Judas Priest's Glenn Tipton and KK Downing.

The mighty Priest are celebrating the 30th anniversary of British Steel, their breakthrough album that included classic cuts such as Breaking The Law, Metal Gods and the stadium anthem Living After Midnight. On 11 May, Sony/Legacy will commemorate this most influential recording with not one but two British Steel reissue packages.

When you're finished voting for the Best Heavy Metal Album Of All Time, you can submit your questions to Glenn Tipton and KK Downing. We're talking to them later this week, so get crackin'! (By the way, we have it on very good authority they're most keen on talking about British Steel...just a hint if you want your question asked.)

Get involved! Choose your question for either Glenn Tipton or KK Downing - or both - and submit it like this: