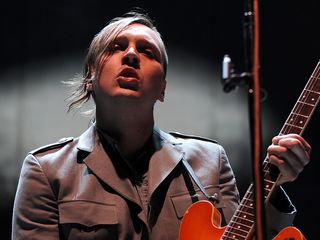 Three albums into their career, it would be easy for Arcade Fire to rest on their laurels, but it seems that the Grammy Award winning band feel that there's still plenty of new ground to be broken.

Speaking to The Telegraph ahead of shows in Manchester and Edinburgh in the coming weeks, frontman Win Butler commented: "A lot of people get really stuck in this idea that everything's been done, and there's nowhere left to go. Rock 'n' roll is almost the most conservative form of performance art: you play your guitar, these are the moves, this is what the songs are about, and this is the energy.

"I always felt like there's so many sounds to make and things to talk about in songs," Butler continued. "There's more to life than 'I love you baby, la, la, la'. I approach it more like film-making: you would never say every film has been made. You just tell another story."

Bathing in the afterglow of the success of The Surburbs, Arcade Fire have already begun work on their fourth studio album.

Read the full Arcade Fire interview in The Telegraph for more on the band's future plans.