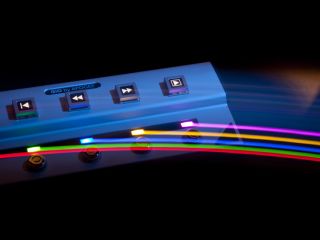 Apogee GiO: use it with Logic or GarageBand.

Apple's launch of a new version of Logic Studio yesterday certainly came as a surprise to us, but it's clear that Apogee has been in the loop for a while. Just as the software was being announced, it revealed that it's readying GiO, a new Logic-specific audio interface/foot controller.

Designed for use by guitarists, this enables hands-free recording and control of several of Logic Studio's key new features. These include Amp Designer, Pedalboard, and MainStage 2's Playback and Loopback plug-ins. GiO is also compatible with GarageBand '09.

GiO's detailed specs are as follows:

Commenting on GiO's launch, Apogee CEO Betty Bennett said: "Our Mac-only focus has allowed us to offer highly refined, innovative products, and give our customers an incredible experience.

"With GiO, users of the new Logic Studio and GarageBand '09 have amps, stompboxes, recording control and legendary Apogee sound right at their feet, whether they're in the studio, at home, or on stage."

GiO is expected to be released in September priced at $395.