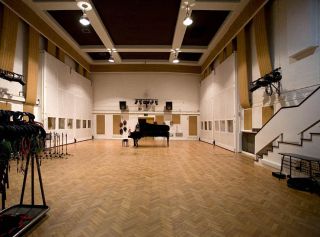 Ever fancied taking a look inside the world's most famous recording studio? How about getting a look at some of the classic kit that was used by some of history's most famous musicians? Well, now you can, as Abbey Road Studios celebrates its 80th anniversary.

As part of their 80th Anniversary celebrations, on 10th March Abbey Road Studios will be opening its doors to the public for a unique experience.

Brian Kehew and Kevin Ryan - authors of the critically-acclaimed, definitive book 'Recording the Beatles' will give an insightful and highly-enjoyable presentation, specifically for the anniversary event.

'Recording The Beatles' has won huge praise from Abbey Road Studios alumni including Alan Parsons, Norman Smith, Ken Townsend and John Kurlander, whose engineering/production CVs count The Beatles, The Hollies, Pink Floyd, The Pretty Things and the Lord Of The Rings trilogy between them.

Kehew and Ryan's '80 Years of Recording at Abbey Road Studios' talk will explore the studio's decades of landmark recordings, celebrating the technology and sonic creativity that lead to epoch defining music from feted artists.

With over 20 years of research into EMI history, Ryan and Kehew have uncovered many secrets of the studios and have worked with Abbey Road Studiosto preserve and illuminate the studios' immense history.

Much more than a talk, the presentation will cover the history of Abbey Road Studioswith rare archive photos, film and audio, showing changes to the studio and equipment. It will illustrate Abbey Road Studios' long progression through all kinds of music, from classical to rock, and the methods used to record in each style/period.

Recordings covered will include Sir Edward Elgar, The Shadows, Peter Sellers, Helen Shapiro, The Beatles, Pink Floyd, The Hollies, The Zombies, the Swingin' Blue Jeans and Kate Bush. The magical film scores captured over the years including 'Star Wars', 'Harry Potter', 'Lord of the Rings' and 'The King's Speech' will also be explored.

Also on display will be original vintage equipment from Abbey Road Studios - including some of the very instruments, microphones, and studio hardware used to create classic tracks. Visitors will be allowed early entrance with time to explore and take photographs in the famous Studio Two, where seminal acts like The Beatles, Oasis, The Hollies, The Shadows, Pink Floyd and Kate Bush recorded epoch-defining music. More recently, Elbow recorded their theme for the 2012 Olympics there and amazing artists like Ryan Adams, Laura Marling and Feist laid down performances for the worldwide 'Live From Abbey Road' television show.

Brian Kehew, co-author of 'Recording The Beatles', is a record producer, engineer and musician. He has worked with The Who, Fiona Apple, Air, Rod Stewart, Talking Heads, Aretha Franklin, and Black Sabbath.

Kevin Ryan, co-author of 'Recording the Beatles' is a Houston-based producer, arranger andcomposer. He is also a talented graphic designer and video/film artist.