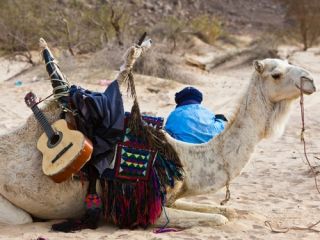 During the course of the past 50 years, guitar music from Africa has gifted the world a vast array of incredible records, musicians, songs and musical styles. TG gives you a definitive guide.

Africa has always been one of the most culturally diverse and artistically creative continents on the planet and, when it comes to music, there's certainly been no place as influential on the sounds we all know and love today.

The roots of blues, rock, jazz, soul and dance, as well as the many Latin American and Caribbean sub-genres, can - in one form or another - all be traced back to the pre-slavery musical world of the African continent and in particular to the countries of West Africa.

While stringed instruments of African origin such as the kora and n'goni can be dated back several centuries, the humble six-string guitar only really began making inroads in the latter half of the 20th century.

Ever since that influx, the fusion of Western guitars with traditional African instruments, rhythmic structures and musical styles has created some of the most vibrant, exciting and original music you're ever likely to wrap your ears around.

Ali Farka Touré (1939- 2006), who hailed from the Malian town of Timbuktu, was one of the most famous and prodigiously talented of all 20th century African guitarists. Transferring traditional African musical styles to the Western instrument and singing in a diverse range of languages, Ali first gained international recognition in 1987 with the release of a self-titled album on the World Circuit label. He went onto collaborate with Ry Cooder, Taj Mahal and Toumani Diabaté and won two Grammy Awards. Martin Scorsese described Ali's music as constituting the "DNA of the blues".

This popular Kenyan form of guitar music first came to prominence in the 60s with the band Shirati Jazz led by Daniel Owino Misiani. Based around the traditional melodies of the eight-string nyatiti lyre, benga is characterised by the interplay of two or three fast-paced electrics backed by a prominent bass.

A Shona word meaning 'struggle', this music is closely associated with the Zimbabwean independence movement of the late 1970s. Popularised by The Blacks Unlimited, and led by chimurenga pioneer Thomas Mapfumo and guitar whizz Jonah Sithole, traditional mbira 'thumb piano' melodies were initially transcribed to the electric guitar with highly emotive results.

Oft-honoured with the nickname 'Machine Gun' for his lightning fast guitar skills, Diblo Dibala has long been one of the best known and most talented Congolese soukous guitarists on the scene. After treading the boards with groups such as TPOK Jazz, Vox Africa and Bella Bella, Dibala's silky skills really began to grab headlines when he moved to Paris in 1981 and joined old compatriot Kanda Bongo Man's new band.

Since 2004, Etran Finatawa have been elegantly fusing the music of Niger's Wodaabe and Tuareg nomadic peoples. Traditional Wodaabe dance and polyphonic harmonies are wedded with characteristic Tuareg 'desert blues' guitar styles to mesmerising effect. Over the past few years, the collective group have been festival regulars across the globe.

Franco Luambo Makiadi (1938-1989) was arguably the most influential six-stringer on the way guitar music developed across Africa during the 20th century. From the mid 50s onwards, Franco's slick mix of Cuban rumba and Congolese traditional rhythms - as typified by his hugely popular bands OK Jazz and TPOK Jazz - not only made him a star in his own right, they also significantly helped the development of the soukous musical genre.

This term describes a centuries-old hereditary caste of wandering musicians whose role across many countries and cultures in West Africa is to record and recount the social history of their people through song and storytelling. Griots often play the kora and one of the most renowned globally is Mali's Toumani Diabaté.

Highlife music, which originated in late 19th century Ghana, has taken many forms in West Africa over the years. The guitar-based highlife of groups and musicians like the Oriental Brothers International Band, Dr Sir Warrior and the African Brothers Band is characterised by strong rhythm structures and uplifting melodic interplay between multiple six-strings.

Raw, hypnotic, psychedelic Tuareg blues is what Group Inerane are all about. Hailing from Niger's Agadez region, the band follow in the footsteps of fellow Tuareg 'protest groups' - like Tinariwen and Toumast - with a chorus of female vocals shimmering over a lo-fi guitar attack that's led by lead man Bibi Ahmed.

Toumani Diabaté playing the kora at Brave Festival in Poland, 2009

Dating back to the 16th century, the 21-string kora is one of the most important stringed instruments in traditional West African music. Crafted from the dried hollowed out shells of large calabash gourds, koras have a double bridge and produce a sound similar to that of a harp. The instruments, which are now sometimes built with a guitar machinehead, are played using the thumb and forefinger of both hands to pick out both polyrhythmic patterns and solo runs. Koras are often the weapon of choice for West African griots. Current notable players include Ablaye Cissoko, Djeli Moussa Diawara and Toumani Diabaté.

A short interview with Lobi Traoré, recorded in 2008

The Malian guitar god (1961- 2010) may only have been just over five feet tall, but his masterly blend of rock, blues, psychedelia and traditional African music revealed a talent that was sky high. As well as regularly collaborating with Ali Farka Touré, Lobi worked with Western artists like Damon Albarn, Bonnie Raitt and Joep Pelt.

Over the past half century, the West African country of Mali has produced a slew of musically diverse artists who have garnered relative levels of success across the Western world, from Toumani Diabaté's traditional kora virtuosity and singer-songwriter Salif Keita's afro-pop, through to the African blues stylings of Lobi Traoré, and Ali Farka Touré and his son Vieux. The desert blues of Tuareg rebels Tinariwen, and Damon Albarn's Mali Music album also deserve a mention here.

The Republic of Niger has been a hotbed of musical activity over the past 20 years, most notably producing the guitarbased music known as Tuareg blues. Many of the genre's groups were formed in refugee camps, a by-product of the rebellions in which the Tuareg people pushed for independence during the 1990s. Toumast, Group Bombino, Group Inerane and Takrist N'akal are some of the best Niger-born Tuareg blues bands.

Although Osibisa formed in London in 1969 and included three Caribbean ex-pats in the original line-up (as well as four Africans), they were arguably the first African-based music act to break through in the Western world. Fusing rock, soul, funk and jazz with African highlife rhythm structures and vocals, Osibisa - aided by the sublime skills of Antiguan axeman Wendell Richardson - still sound as fresh today as they did back in the 70s.

Across his Grammy Award winning 1986 masterpiece, Graceland, Paul Simon incorporated elements of traditional South African mbaqanqa music while also choosing to record with many South African musicians in their home country. Gumboots, which was based around an instrumental written by the Boyoyo Boys, is a real highlight.

While it's almost impossible to find a word that begins with the letter Q in relation to African guitar music - partly due to African language structures - special mention can go to Queen Babito, the current band leader of Kenyan benga legends, Shirati Jazz.

Self-taught Rokia was championed by the Ali Farka Touré and plays fingerpicked sixstring acoustic and semi-acoustic to back her sublime vocals, as well as the traditional n'goni and the wooden keyed percussive balafon.

Soukous originated as a form of the Congolese rumba and, in the 1940s, guitar legend Henri Bowane reputedly added the sebene - an instrumental passage characterised by one or two guitars developing repetitive arpeggios while another axe improvised over the top. Soukous guitar styles were pushed even further by Franco Luambo and Nico Kasanda in the 50s and 60s, and Zaiko Langa Langa and Diblo Dibala from the 70s onwards.

Formed by lead guitarist Ibrahim Ag Alhabib in Libya in 1979, Tinariwen are a collective group of Malian Tuareg musicians, some of whom fought in the rebel insurgencies during the 1990s. The collective, who fuse electric guitars with the melodies and rhythmic styles of traditional Tuareg music, have wowed audiences the world over since they first garnered international attention a decade or so ago. 2007's Aman Iman album is a must hear.

Uwaifo is arguably Nigeria's greatest guitar hero as well as being one of the country's most successful. His 'joromi' adaptation of highlife music mixed up soul, rock and funk with more traditional African musical forms. In his heyday, Victor Uwaifo even played his guitar with his teeth, feet and tongue!

Co-founded by Peter Gabriel in 1980, World Of Music, Arts and Dance is an international arts festival that has showcased 160 major festivals across 27 countries. Many African artists, including guitar-based acts, have been given their first international gig opportunities by WOMAD.

Johnny Marr on stage with Amadou & Mariam at an Africa Express show in London, 2008

Damon Albarn kicked off this touring musical collective in 2006 with the aim of bringing together Western and African musicians on an equal live footing. Toumani Diabaté, Bassekou Kouyaté and Amadou & Mariam have all taken part, as have Jamie T, Fatboy Slim and Johnny Marr.

Langa Langa Zaiko Langa Langa formed in 1970 and are one of the most important Congolese soukous bands of the 20th century. They're widely credited with pushing the genre into more up-tempo, electric guitar-focused areas. Lead guitarist Manuaku Waku, aka Pépé Fely, was renowned for his speed, dexterity and extended sebenes.