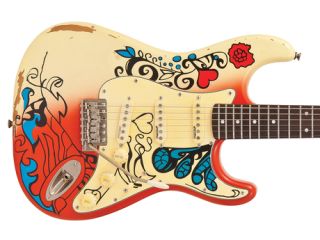 PRESS RELEASE: Legendary axe-slinger Thomas Blug has once again joined forces with Vintageguitars to produce an epic new signature model influenced by the man many people think of as the greatest guitarist of all time.

The Vintage Summer Of Love V6MRHDXis a nod to an iconic guitar played by the inimitable Jimi Hendrix. The newest model in the celebrated Vintage ICON range of distressed, or relic'd, instruments, the Summer Of Love's body and parts have all been meticulously aged to simulate years of onstage use.

The guitar features the same boutique specs as Thomas's treasured '61 and his original Vintage signature, the V6MRTBG - the only differences being the reverse headstock and the cooler-than-cool, hand-applied graphics created by German artist Daniel Hahn.

The V6MRHDX's body is alder, and it features a hard maple, bolt-on neck with a 7.5-inch radius rosewood fingerboard and 21 frets. All the hardware is genuine Wilkinson, including the three vintage-voiced single-coil pickups, with aged ivory covers and Thomas's beloved Bukkaswitch, which is operated by a push/push pot on the back tone control, and provides a hum-cancelling, subtly tone-altering extra dummy coil when needed. This is a whole lot of guitar for just £479.

Thomas said: "With the Summer Of Love, I wanted a guitar that looks cool - like Hendrix's, but with all the features of my signature Vintage ICON V6 guitar and my '61 workhorse. And it had to play like all the guitars I usually play: pickups in the same position and not a reversed body."

The Summer Of Love was unveiled at a recent show, Blug Plays Hendrix, where Thomas and his band rocked through 10 Hendrix covers in front of a wild crowd. Recorded as a live CD and DVD, the show was the ideal debut for the V6MRDX, and the guitar is now a staple of Thomas's incendiary live performances.

Thomas said: "The Summer Of Love is the first 'flower power guitar' that feels like home. It's a great looking guitar, with all that spirit and performance - and my tone. I get inspired just by looking at it!"