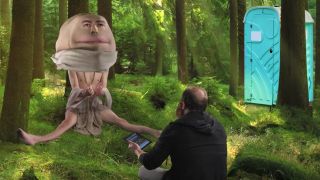 Your guess is as good as ours.

It's rare these days for a new guitar or hi-tech music making product to be launched without the visual fanfare of a promo video, and there's a pretty standard blueprint that most developers and manufacturers stick to.

The idea is usually to show you what the product looks and sounds like, detail its specs with a few captions, and possibly cut in a bit of performance footage for inspirational purposes.

Sometimes, however, that blueprint is dispensed with, and we're treated to a video that does things a little differently. Here, we celebrate the demos and previews that, for one reason or another, are at least as memorable as the products that they featured.

We'd have thought that the Octatrack would have been a pretty costly machine to develop, but Elektron must have had some budget left over when it finished making it in 2010, and so took the perfectly reasonable step of creating what's effectively a mini movie with Hollywood production values to promote it.

About as far away from the typical 'these are the specs and this is how it sounds' style product demo video as you can get, this feels like the first episode in a new dystopian Nordic Noir drama series on Netflix.

Mixers are useful things, certainly, but they tend to be objects of practicality rather than desire, even if they happen to have the benefit of iPad control.

When it launched the DL1608 in 2012, then, Mackie decided to adopt some out-of-the-box/off-yer-face thinking, telling the everyday tale of the live sound engineer who enters a hallucinogenic world and eats a small bird off his shoulder. It's one that we can all relate to.

Superhero movies have shown us that people can use all kinds of special powers to fight evil, but we never thought we'd see the day when the goons were conquered using a bundle of Ableton Live-specific soundware.

That's what appears to be happening here, though, with a plucky producer using Sonic Faction's software to save himself (and probably the world as well).

It's the age old story: boy creates beat on laptop using Steinberg's Sequel 3, literally bumps into a girl in the street, sneaks up behind her and puts a pair of headphones on her ears, shows her some lyrics that he's written on his hand, convinces her to come and record them in the studio, then gives the finished track to a DJ who also happens to have Sequel 3 installed on her laptop. Finally, boy dances with girl.

Happens all the time.

Johnny DeMarco is something of a legend in product demo circles, and it's not hard to see why. Known for his boundless enthusiasm, glorious gurning and super-fast playing, he even has a catchphrase - "fuggedaboutit!". We never want to fuggedabout this.

What begins as a regular product demo quickly becomes a mini musical travelogue, as our guitar-toting protagonist and his sofa are quite literally transported to multiple locations that reflect the settings on his pedal.

It's all wonderfully therapeutic, and should probably be recommended by healthcare professionals as de-stressing tool. Beautiful.

There have been many attempts to reinvent the guitar using technology, and the SynthAxe - released in the mid-'80s - was certainly one of the boldest.

After a grandiose opening, current Guitar Techniques editor Neville Marten remains remarkably calm in the face of the "power and sophistication" of this new instrument, and there are also contributions from Allan Holdsworth and Lee Ritenour.

When, back in the '90s, someone at Creative Labs was instructed to create a new keyboard, they clearly weren't sure whether this was supposed to be of the QWERTY or MIDI variety. So, rather than bother to ask, they did what any sane person would do and built the Prodikeys, which contained both.

The product itself has long since faded from memory, but this classic display of mini-key drumming will stay with your forever.