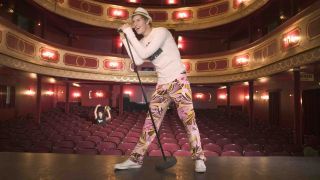 With trousers like that, it's no wonder (Image credit: Schultheiss Productions/Corbis)

Although the government has recently promised to protect small music venues, it seems the UK's live music industry is in decline, with 63% of people steering clear of live music altogether over the past 12 months.

Research from AV and lighting firm Avonics found that, of 750 respondents, people aged 25 to 34 were more likely to attend live music events, with 46% saying they'd been to a gig in the past year, while 18 to 24-year-olds were least likely - 70% said they hadn't.

This report adds to fears that the UK's music industry is shrinking - according to The Guardian, 50 music venues have closed in London since 2007, and it's a similar picture across the country.

Government cuts, gentrification and escalating ticket prices are all thought to be part of the problem, and it all adds up to fewer opportunities to perform and experience live music.

Do these statistics stack up to your own gig-going experience? What do you think can be done to boost the UK's live music scene? Let us know in the comments below.