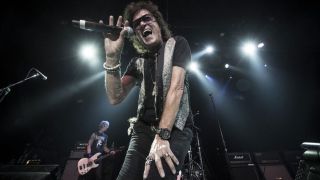 The Voice Of Rock shoots on the art of hard work, minding his Ps and Js, and why he's binned off keyboard players...

Three is the magic number

"Power trios are how I started out as a teenager. California Breed was a trio as was Black Country Communion when Joe [Bonamassa] and I started it.

"Now with my solo band I'm getting back to what I want to do as a trio. When I add keyboards it starts to become street jazz and R&B. I've come back to my classic rock roots and back to a trio. That means a lot to me."

"In the 90s I was making records, and those songs were so hard to play and sing live. Around 2004 when I made Songs In The Key Of Rock, I decided that I needed to write on the bass and sing in the studio to give me a rough idea of whether I could sing and play them live. I am now very careful with that.

Go with the flow

"A lot of friends of mine were famous rockers and they stopped playing it and played other kinds of music and their fans became very upset. Rock has been very good to me and I have this rock voice.

"When I go on stage I have to do what comes naturally to me and that is rock. People grew up listening to the rock Glenn Hughes and when people come to see my solo shows that is what they're gonna get."

I'm all about that bass

"I like Fender Js and Ps. You've seen me play the P bass for so long, but of late I have gone back to playing Js. The P has a thicker sound. I have a great deal with Orange though so I can get the thicker P sound on my J bass and the J neck is easier to play. It just has a little extra something in the mid range as well, which I really like."

I got my first real six-string

"My first guitar was an acoustic guitar my mom bought me for Christmas that didn't even have a brand name on it. Then it was a Futurama guitar. From there I had a Hagstrom and then a Rickenbacker, then a Telecaster then a 355.

"After that I started playing bass and my first bass was a '62 Salmon coloured Fender Jazz bass, which I really wish I still had. I'm a crazy vintage collector, I have 240 basses and guitars. When you stop drinking and doing drugs you have a bit more money to spend on things that you enjoy."

"I'm going to be studying until I'm dead. I will never be the complete article. I will always be studying. Music to me is the healer, my music has saved my life so many times, it really has."

"I played the Sunbury Music festival in Australia in 1975 and it rained like you have never seen rain before in your whole life. It was worse than Woodstock. It was devastatingly evil, the rain was so bad. It was horrific to play in it and watch these kids get completely soaked and have mud flying everywhere."

In my darkest hour…

"My bodyguard was killed in Indonesia in 1975. That was devastating. I'm filming a movie about that this and next year. It will be my side of what happened. I was thrown in jail when that happened because he was with me right before he was killed.

"When you're in jail accused of murder, you're spinning your wheels thinking, 'I'm in a third world country, I'm the first Westerner to play in a soccer stadium here and I'm in jail, am I ever gonna get out?' For the documentary I'm going to go back to the hotel where he was killed and walk the corridors."