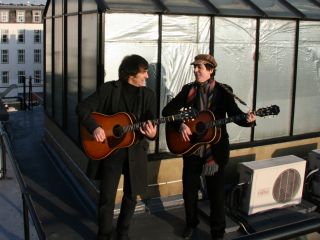 Two of us: Bootleg George and Paul up on the roof

On 30 January 1969, the greatest band in the world, The Beatles, performed on the roof of Apple Corp at No. 3 Saville Row, London. Their 42-minute set was cut short by the Metropolitan Police as ecstatic crowds gathered below.

Forty years later, it happened again, only this time it was just two gents, Andre Barreau and Dave Catlin-Birch, who were given the boot by the Westminster Council.

But Barreau and Catlin-Birch are George and Paul in The Bootleg Beatles, and their expulsion from Apple Studios is especially noteworthy.

Concert stopped before a note was played

To commemorate the 40th anniversary of The Beatles' last-ever 'concert,' The Bootleg Beatles intended to recreate this historic event by heading up to the very same roof. This time, however, the performance was stopped before a note was played.

"It became economically unfeasible for the band to do so," says Emma Busk, publicist for The Bootleg Beatles. "Originally, everything looked fine for the band to give a proper concert, but then there were various health and safety issues addressed by Westminster Council. They probably could have gone ahead with the concert, but in the end, to do so would have cost them thousands of pounds."

Even so, Bootleg George (Barreau) and Bootleg Paul (Catlin-Birch) still managed to get an acoustic song in - The One After 909 - during a brief radio broadcast. "It's really a shame," says Busk. "The event was supposed to be a grand 40th anniversary celebration. But maybe it's better this way. What The Beatles did back in '69 was one of the first punk rock moves; what we did yesterday was in the same spirit."

30 years ago, everything was different

Interestingly, The Bootleg Beatles put on a proper 'last concert' 30 years ago at the same location, No. 3 Savile Row, under vastly different circumstances.

"The building was occupied back then," says Busk. "All of the clearances they had to go through were easy. Right now, however, the building is being rennovated, it's pretty much empty, so it's not so simple anymore."

Watch The Bootleg Beatles performing Get Back in 1999. They've got it nailed, right down to Ringo's red raincoat.

And then check out the genuine article, playing live for the last time ever in 1969.