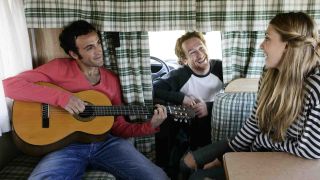 The life of a guitarist is intrinsically linked to the happiness of others. Music, after all, is meant to be heard, and what's a musician without a crowd?

Of course, the problem with all this 'performing for people' lark is that you're going to be bombarded with requests. And man, do they get repetitive.

So, here they are, the songs every guitarist is sick of being asked to play - and remember, every single one of them is being reluctantly strummed by someone, somewhere, right now. The horror...

The problem with people is, people think they're funny. And that is why, whenever anyone hauls themselves on stage and plugs in an electric guitar, some wag, some genius, some absolute bantersaurus, will shout out "Free Bird".

Please note: the best answer to this ribald prankster is to play Free Bird in its entirety every single time he shouts it out, for hours, for days and weeks on end, on and on until the death of the universe, when all that remains is Free Bird, eternal and never-ending. That'll learn 'em.

American Pie is the reason that people stopped writing songs with more than two verses. Even Don McLean doesn't know all the words. That won't stop people wanting you to play it, mind.

It is a truth universally acknowledged that whenever a guitar is strummed in public, somebody - usually in their mid-40s, usually in neatly ironed jeans - will ask for American Pie. They'll get all excited at the 'do you believe in rock and roll' bit, they'll bellow along to the chorus, and a vacant look will gradually take over their faces as the verses progress. Which is why we do what we do, right?

There aren't many songs about crack cocaine that also feature a line about pastries. Say what you like about Ed Sheeran, but the man knows how to make his audience yearn for a crumbly treat, hot from the oven. Delicious.

Anyway, The A Team was quickly learned by every busker in the western world when they realised just how many pastries could be purchased with the money they would make from performing this song each time it was requested. And thus, the circle is complete.

The thing about Stairway To Heaven is that, with the best will in the world, the average audience doesn't know much past the intro and the first verse. Which can make the remaining seven minutes quite a tricky sell. Even the bloke in the Led Zep shirt who requested the damn thing will be questioning his life choices by minute five.

Still, at least you'll enjoy yourself, pulling all your best Jimmy Page moves and ripping out the solo like the guitar hero we all know you to be. Little victories, eh?

What is it about Hotel California that people love so much? Is it the chords? The harmonies? The 2.75billion guitar parts? Whatever it is, this is a song as likely - perhaps moreso - to be requested in a pub in Walsall as it is a bar in Pasadena. Such is the power of Eagles. And in our hearts, are we not all suffering from the intense paranoia that accompanies longterm cocaine abuse?

Four chords adequately strummed, a bog-standard string arrangement, sentimental lyrics vague enough that anyone can project meaning on to them - this is standard rock-band-acoustic-number fare. But once you've been asked to play it a couple of thousand times, its begins to chafe.

What was once an innocuous addition to a mid-career Green Day album has become one of those montage songs for the final episode of middle-tier sitcoms. An easy win for wedding bands and unimaginative campfire sing-along leaders.

8. The Animals - House Of The Rising Sun

There is a reason House Of The Rising Sun is the first song every guitarist that picked up the instrument before 1995 learned, and it's not because it's easy. No. It's because the fathers of those brave pre-digital-era strummers wanted them to play it.

For those fathers loved House Of The Rising Sun. It made them feel like men, somehow, transporting them back to a long-distant past when boys with haircuts and electric guitars co-opted ancient folk songs and turned them into hits. The intro to The Animals' version alone is enough to reduce broad-chested blokes to puddles of howling, whiskey-sodden regret.

Mustang Sally is about a woman who thoroughly enjoys driving her new car, but refuses to allow the gentleman who bought her said motor vehicle to join her. Rude? Yes. The basis of a hundred-thousand annual song requests? Also yes.

We don't know why. Perhaps there's some kind of thinly veiled euphemism hidden deep within this song's DNA? Maybe it's because that bloke from the Commitments convinced every lager drinker in the land that they, too, could front a soul band? Nobody knows. Just play the bloody thing and move on with your life.

Wherever there is a campfire and a guitar, there is a deep yearning among those gathered that somebody, anybody, play this song. Now, let's not get it twisted: this is a great song - when Bob Marley does it. When anybody else attempts it - especially folk whose greatest tribulation is having their name spelled wrong on their Starbucks cup - it is all kinds of awful.

Ironically, there is no redeeming the vast majority of people who play Redemption Song willy nilly. Remember this and you'll go far.

Bob Dylan wrote many a great song. Knockin' On Heaven's Door is not one of them, but people are convinced it is. And that means that you're going to have to play it at some point in your life.

Blame Guns N' Roses. Blame Eric Clapton. Blame every open mic-er who chose this, out of a back catalogue bursting with moments of mercurial genius, to showcase their deep affection for the life and work of one of the greatest musical artists ever to string three chords together. But don't blame Bob. It's not his fault. None of this is his fault.

Get Lucky is not a song. Get Lucky is a virus, a virulent strain of disco fever that gripped planet Earth some time in 2013. Fingers were clicked. Hips were gyrated, in direct contravention of government guidelines. Pharrell Williams was lauded as some kind of funk savant. It was a dark time, and the effects are still felt to this day.

In clubs and pubs up all over, limbered-up lads and randy old dears alike want to get lucky, and they will be heard. Loosen up your wrist and accept your fate, for there is no escaping this insidious piece of French funkmanship.

Enter Sandman is the most metal song that people who aren't into metal at all know. And so, if you or your band has even the slightest of heavy tendencies, you will get asked to play this at some point in the evening.

Men in fresh white t-shirts with cropped hair will attempt to headbang. Confused girls in shop-bought AC/DC shirts will throw gang signs in an ill-advised attempt to throw the horns up. It will be hilarious and depressing in equal measure, and there's nobody but Metallica to hold to account. Damn you, Hetfield. Damn you to Hades, you beautiful bastard.

"Can you play that Justin Bie…"

The 10 worst things about being a guitarist