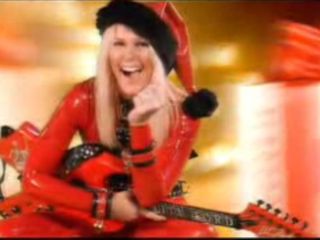 Lita Ford - not the real Santa

Maybe it's the distinct lack of peace on earth that makes ever-more musicians believe they can heal the world's wounds with music? Or perhaps bands just know a decent marketing angle when Christmas consumerism smashes them in the face?

Fact is, there seems to be more Christmas 'singles' available in 2008 than ever before. Some are from big names, Elton John and The Killers taking the superstar(s) prize with Glasvegas a cooler second.

Other offerings are heartfelt, some are quite rotten, and a few are simply weird.

It's currently three weeks to go to Christmas, and not one mince pie has yet passed MusicRadar's lips. But we can already alert you to 13 good/bad/ugly Christmas songs coming your way. These - in no particular order - are just a selection of 2008's offerings.

Click on the song titles to hear each track.

There's got to be more, so please share any other Christmas joy you know…

1. The Wombats
Is This Christmas?
Paul McCartney rates the Liverpudlian indie scamps, and as writer of Simply Having A Wonderful Christmas time, Macca would usually be trusted on matters of festive song. But this feels like a Boxing Day hangover.
MusicRadar verdict: Sleigh bellends.

2. Frightened Rabbit
It's Christmas So We'll Stop
The Scottish indie troupe released this dirge in 2007 but are having another go at fame this year. Not exactly uplifting.
MusicRadar verdict: Yes, please stop.

3. The Killers and Elton John
Joseph, Better You Than Me

With Pet Shop Boys' Neil Tennant weighing in, this is 2008's big-hitting collaboration. Hardly The Killers' best Christmas tune (we liked 2007's warped Don't Shoot Me Santa), but it's for the (Red)Wire charity, so God bless all involved.
MusicRadar verdict: Give them your money, and don't bother buying the single.

4. George Michael
December Song (Dreamed Of Christmas)
Michael is giving this away as a free download from Christmas Day and he piles on all the clichés needed to give granny a warm glow. Is it as good as Wham!'s Last Christmas? Is it fu…
MusicRadar verdict: For mum, it's everything she wants.

5. Status Quo
It's Christmas Time
Masters of the obvious, the Quo remind us that - yes - it's Christmas time with accompanying generic boogie. Godawful.
MusicRadar verdict: Not the work of wise men.

6. U2
I Believe In Father Christmas

Once again in aid of the (Red)Wire campaign, here's U2's cover of Greg Lake's 1975 smash hit. The instrumental riff from Prokofiev's Lieutenant Kije Suite is tailor-made for The Edge's plinky-plonk guitar stylings.
MusicRadar verdict: It's no New Year's Day.

7. Twisted Sister featuring Lita Ford
I'll Be Home For Christmas
Good Lord. They put this out in 2006, and now again? Dee Snider's 'singing' is truly a miracle.
MusicRadar verdict: If you're coming 'home', we're moving house.

8. Terry Wogan and Aled Jones
Little Drummer Boy / Peace On Earth
The UK's "favourite DJ" and premier "ageing choirboy" recreate the Bing Crosby/David Bowie horror of the 1970s. All proceeds go to the UK's Children In Need charity, so we shall not scoff. But it must be asked…
MusicRadar verdict: Can we pay money to make it go away?

9. Austrian Death Machine
Jingle Bells
Just what you were waiting for. An As I Lay Dying spin-off band who simultaneously pay tribute to Arnold Schwarzenegger and smash-up a trad Christmas song, hardcore style.
MusicRadar verdict: It sleighs.

10. Glam Chops
Countdown To Christmas / Baby Jesus Was The First Glam Rocker
'Masterminded' by Art Brut frontman Eddie Argos, the second track of this double-hit sings of "shepherds with Flying V guitars" and "wise men with glitter on their faces". Diverting… for about 7 seconds.
MusicRadar verdict: All that glitters is not gold.

11. Glasvegas
A Snowflake Fell (And It Felt Like A Kiss)
Scotland's finest haven't recorded just one song, but a whole Christmas album. Phil Spector-esque and bruising Glaswegian melodrama make for songs that actually stand up on their own.
MusicRadar verdict: Maudlin, delicate, broken - just like a real Christmas.

12. The Hives and Cyndi Lauper
A Christmas Duel

13. The Feeling
Feels Like Christmas
The UK pop robots have been "saving" this one for a couple of years, says frontman Dan Gillespie Sells. "Is it Christmas or am I going insane?" he asks. Erm, can we get back to you on that one?
MusicRadar verdict: We're not 'feeling' this one at all.

And this list doesn't even include the potential horrors of releases by politics broadcaster/dance show contestant John Sergeant, or comedian Peter Kay collaborating with Take That's Gary Barlow.

If Christmas is a season of goodwill, it's not exactly kind on people's ears is it?