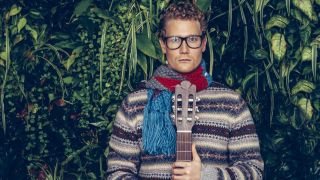 There are as many different types of guitarist as there are styles of guitar. We come in all manner of finishes, shapes and configurations, but there are certain archetypes that recur again and again.

Stand in any guitar shop for long enough and we guarantee you'll spot some - if not all - of the common-or-garden guitarist varieties we've rounded up here...

Gear: '95 Fender Jag-Stang; Vintage Selmer Selectortone
Technique: Angular and annoyingly proficient
Venue: That 'secret' dive bar with no sign that every town has

With their oversized glasses/unnecessary scarf/waxed moustache and endlessly in-use phone, the hipster is easy to spot. More likely to take heavily filtered pictures of guitars than actually play them, they nevertheless possess in-depth knowledge of offset Fenders.

You might want to dismiss the Hipster at first, but go easy: they will almost certainly have a deep knowledge of esoteric music and will take great pleasure in helping you source interesting new sounds. When they play, they only know chords gleaned from Berber folk music, but each to their own, we say. Don't ask them to strum conventional shapes - you'll only confuse them.

Gear: A Vox AC30 Rory Gallagher gave to him; a '59 Les Paul he forgot to insure
Technique: Flawless
Venue: Vintage guitar shops owned by the same person for 40 years

A session player in the '60s, a drug addict in the '70s, back on the road in the '80s and a bona fide industry legend ever since, the Old Master has done it all. You've never heard of him, but he doesn't care. Neither would you if you'd jammed with Hendrix in '68.

He has those weird old-man fingers than are mostly knuckle, and will only play pre-1960 Les Pauls, but when he lets his hands go, decades of rock 'n' roll history pour out.

He can do more with one note than most of us can do with a hundred. His are the old ways, the best ways, and he is a living connection to the greats. Do not be fooled by the hearing aid and comfortable shoes: the Old Master is a monster.

The Pro cares not for your flashy finishes or your gimmicks. They care only for hard practicalities. Will this guitar stand up to 300-plus gigs a year? Can this cab stand the rough hands of a veteran roadie? Guitars are tools to them, amps almost disposable.

The Pro dresses in black, all the better to fade in to the backing band, but their playing is anything but anonymous - because they can play anything. Flamenco? Funk? Russian death-jazz? Not a problem for the Pro. There's not a stage they haven't played, but nobody knows their name. Just how they like it…

Genuine, dyed-in-the-wool Jazz Cats are a rare breed these days. Much like jazz itself, these adherents to the old ways are not often seen in the wild, and in some parts of the world are all but extinct.

And yet, if you are patient, you can catch the Jazz Cat still out there, playing with their trio, softly murmuring something about Pat Metheny between songs. Technically skilled, the Jazz Cat's preference for impressive but ultimately meandering single-note solos has turned them into lonely creatures. Cherish them, for soon they will be gone.

He has a beard mightier than Gandalf and he knows what flax is. He is drawn to anything acoustic with strings - guitars, naturally, but also mandolins, bouzoukis, banjos - and he can make them all sing.

When, after much retuning, he begins to weave his strange fingerpicking patterns, what you hear is the sound of the earth, long ago. The people who built stone circles heard music like this; it is old and calm and deeply weird. When his back is turned, you'll strum his guitar only to find every string has been tuned to E♯. Such are the forever unknowable ways of the wizard.

They smell of leather and wealth, and wear watches worth more than most cars. Maybe they were in bands in their youth, maybe they toured a little, maybe they nearly made it. But when the band broke up, they went back to college, and 30 years later they're rich enough to afford all the gear they couldn't when they were 19.

These men - and they are always men - are the lifeblood of the guitar industry, buying more boutique pedals, hand-wired amps and super high-end guitars than anyone else. Cherish them, for without the Dentist, your favourite manufacturers would be in serious financial difficulty.

His hair is long but thinning, his jean jacket faded, but the fire still burns in the Ageing Rocker. He remembers when guitarists looked like pretty girls and bare chested singers screamed thinly veiled double entendres at enormo-crowds.

When he plugs in he channels his heroes: he is Angus. He is Jeff. His fingers aren't as nimble as they once were, but he can still nail Parisian Walkways. A keeper of the sacred flame, he is forever in search of the Great Rock Saviour, and we wish him all the best in his quest.

Black is the colour of this guitarist. Their guitars are black, their t-shirts (all of them) are black, and it's odds on at least one of their fingernails has been painted black, too. A dedicated Metalhead since their early teens, they've seen every iteration of the genre come and go, and have stayed the path.

These days, they've evolved into the more progressive side of things, favouring eight-strings and bands like Animals As Leaders. Alt tunings and heavy, heavy riffs are the order of the day for the Metalhead, and one of these days their band will play Download*.

*They probably won't, to be quite honest, but even the blackest of hearts have dreams.

Here they come, with their studded faux-leather wristband and Foo Fighters t-shirt. The Weekend Warrior has the healthy glow of somebody who only plays music for fun, and appears to have no self-esteem issues whatsoever. Their cover band's monthly gigs are enough to ensure that everyone they know thinks of them as an honest-to-goodness rocker.

Fame and fortune never came knocking, but in their heart, they know they weren't cut out for it anyway, and nowadays they play for the love of it. In many ways, the Weekend Warrior is one of life's winners, and fair play to them we say.

With the hair of a hip nan and the parka of an extra in Quadrophenia, the Britpopper bowls their way around the world with the confidence of Liam Gallagher. In their mind it will be always be 1995, and their fingers will forever strive for the sound of that summer.

They will make a beeline for Epiphones and Rickenbackers, seek out the biggest Marshall possible, and proceed to strum mid-paced powerchords for hours on end, dreaming of Knebworth. They can't really play, but will argue (correctly) that you didn't need ability to become a millionaire back in his day. The world may have moved on, but the Britpopper never will. Long may their Vespa run.

Gear: Literally anything; they're not remotely bothered
Technique: A gift from god
Venue: Wherever the muse takes them. Sometimes Tesco, by accident

Real genius doesn't show up with shades and an entourage. Real genius, in fact, can barely tie its shoelaces. Behold the Idiot Savant, the rarest of all guitar-toting breeds: they can play anything, instantly, by ear, but are entirely unable to tune their own instrument.

This is not a guitarist; this is a conduit for the music of the universe to flow through. Cherish your time in the company of the Idiot Savant, and for god's sake, if they break a string put a new one on for them.