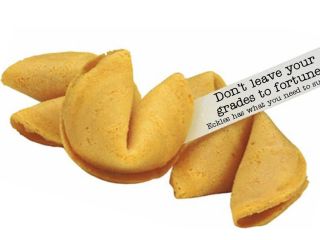 Translation: "Let's get it on!"

Rock lyrics. Face it: Half of us pay no attention at all, and the other half pay way too much attention, reading 'truths' into rhymes thatare either a) unintentional or b) seriously miscontrued.

Case in point: The Smashing Pumpkins' Disarm is a gorgeous song, no doubt. But when Billy Corgan sings, "What I choose is my choice," who among us doesn't say, "Well, duh! Who's else is it, Bill?"

It's amazing that these pearls of 'wisdom,' usually scrawled in notebooks during recording sessions to fit bars of music, are taken as monumental truisms, when in fact, they would fit quite nicely as inserts in fortune cookies, swallowed bite-sized - absorbed and then forgotten.

With this in mind, MusicRadar presents the definitive list of rock lyrics that could be fortune cookie inserts. Take them for what they are, folks, no more and no less. And maybe a couple of spring rolls couldn't hurt.

"All of us get lost in the darkness/ dreamers learn to steer by the stars" Yeah, well, that's cool. But what if we still can't find the Big Dipper?

"Even the genius ask questions" Overlooking the singular/plural mangling, we know a few smart alecks who still won't ask for directions when they're driving.

"You live by the sword, you die by the sword / you're only free to buy the things you can't afford" Two-thirds of that is great; the other third, say what?

"The only thing a river knows / is runnin' to the sea / and every spring when a flower grows / it happens naturally" We know, we know - picking on Michael Bolton is like shooting fish in a barrel. But at least that's one 'dock of the bay' reference that works.

5. Eric Clapton, Bo Diddley, CCR - Before You Accuse Me

"Before you accuse me, take a look at yourself" But if you stole our car, our money and our woman, we're still comin' after your ass!

"You're living in your own private Idaho" Question: What if you happen to be one of the 1,523,816 people living in Idaho?

7. Morrissey (The Smiths) - Meat Is Murder

"It's death for no reason/ and death for no reason is murder" Actually, there is a reason: so we have something to eat. Sorry, tofu doesn't cut it for all of us. Perhaps you and Ted Nugent should Twitter. (But we still love Johnny Marr's guitar playing - brilliant!)

"You have many contacts / among the lumberjacks / to get you facts / when someone attacks your imagination" Just curious: was this before or after the motorcycle accident?

"Don't you draw the Queen of Diamonds/ boy, she'll beat you if she's able/ you know, the Queen of Hearts is always your best bet" So we have a 1 in 52 chance? Thanks for the crappy odds, guys.

"If you like to gamble, I tell you I'm your man / you win some, lose some, it's all the same to me" Given this advice, we'll take Lemmy at poker. Clearly, he's not too bothered.