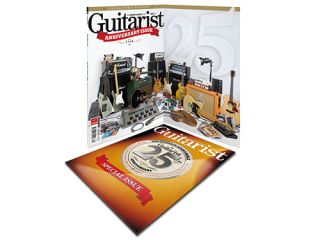 Guitarist magazine celebrates its 25th Anniversary this issue with a special collector's edition, on sale now.

The bumper magazine comes in a special wallet, containing a stunning fold-out cover featuring some of best gear of the last 25 years. Want to see how they did the cover? Check out this behind-the-scenes video:

The cover feature is The 100 Greatest Guitar Things Of The Last 25 Years - a massive 18-page celebration of gear, artists, albums and more. Over the course of the week, on the Guitarist Blog and on Musicradar, members of the team have been picking their personal favourite guitar things, but here's the second teaser of what made the official final 100 in the magazine…

With his Gibson SG and endlessly inventive licks, Trucks emerged in 1997 to carry the torch lit by Duane Allman into the realms of blues, gospel and world music.

Make no bones about it, a proper, full-fat Gibson Les Paul is ruddy expensive for your average teenage guitar-slinger. Thank heavens then for Epiphone, which since 1988 has offered an affordable yet quality alternative for budding Jimmy Pages.

He sings, he plays, he writes songs. While that sounds simple enough, Dumble-toting tone hound Mayer brings together the blues, the sensitive singer-songwriter and, shock horror, A-list success.

A pioneering slab of down-tuned angst that spawned nu-metal, opening the door to a generation turned off by excessive shredding and, ironically, kick-starting a technical playing renaissance from the backlash.

The nineties wasn't exactly a vintage era for metal. Thank Thor, then, for this Texan and his savage Southern groove that filled Pantera's Cowboys From Hell and Vulgar Display Of Power. Never forgotten.

Legend has it that Fender sent Keith Richards a bunch of '52 Reissue Telecasters for a Stones world tour. "They're too new, man," bemoaned the wrinkled one, so Fender beat them up to look like Keef's beloved vintage instruments. The Nocaster was the first of many in 1995 and today the Fender Custom Shop's most celebrated work is recreating cool looking 'vintage' pieces. Some say they look and sound awesome; others despise the very idea.

Fifteen great delay models, plus a looper, all in one ingenious little unit. Line 6's green trickbox has appeared on the boards of the rich and famous since 2000. !oot gnittes esrever eht yrt dnA

21. Dire Straits - Brothers In Arms
Darling of the CD generation

CDs were the new big thing, AOR ruled the radio waves and MTV was busy making superstars as Brothers In Arms hit the shops in 1985. Perfectly produced and crammed with fabulous guitar sounds - "Money For Nothing was just that old two-finger thing again," said Knopfler of the album's piece de resistance - it propelled Dire Straits right to the top of the world.

It's been nearly 20 years since Stevie Ray Vaughan was killed - two decades of hindsight that confirm just what a stellar talent he was. His debut release with Double Trouble was Texas Flood in 1983, with two follow-ups just in time for the MTV explosion of the mid-1980s. He defined the spirited Texas blues style that's been so heavily appropriated since, beating that down-tuned '62/'63 Strat with accuracy and attack unmatched by any of his forebears or progenies - one note and it could only ever be him. "I figure there's no sense in going out there and not giving it what you've got," as he told Guitarist in 1988. "By playing, you can make yourself feel better."

6. The internet
At your fingertips

The internet has changed music in every way possible: mp3s and digital distribution enable every artist to get their music heard, in turn changing how we discover and buy new music. It's also changed the way we buy guitars, like it or not, and vastly improved our access to information on how to go about it. It's the great democratiser… even if it has created indomitable giants in Google, YouTube and Ebay.