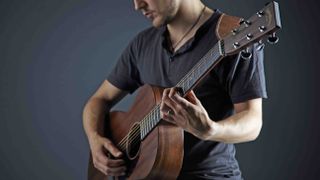 Getting good tone from an acoustic electric guitar onstage isn't as simple as just plugging in and letting rip; there's much more to think about, but it can be tricky to pinpoint exactly what you're looking for.

A lot depends on your pickup and amplification, of course, but a few simple EQ and effect tweaks can go a long way, no matter what gear you're using.

With that in mind, here are 10 tips to get that electro-acoustic singing…

Spend some time with your EQ on your guitar, preamp or amp. Turn them up and down (while the others are in the middle) and decide what the sound change means to you. Is it 'boom', 'chest', 'sparkle', 'honk'? Hopefully the new word makes more sonic sense to you than 'bass', 'middle' and 'treble'.

When using an under-saddle pickup, use a parametric mid control to cut the quacky frequencies. You'll find them usually between 1 and 3kHz, so start by boosting the midrange, then sweep the frequency control across 1 to 3kHz, ish, and stop where it sounds most disgusting. Now you've found it, give it a savage cut - up to 10dB isn't unusual.

In addition to the quack, piezo pickups can sound quite boxy in the lower midrange. You can improve this by boosting both bass and treble (assuming you don't have any more parametric mid controls after your quack adjustment).

Before you leap for the EQ knobs to control unwanted feedback, see if the guitar's preamp or amplifier has a phase control. It usually sorts it out. But if it doesn't…

A notch filter is a parametric EQ control that works over a very narrow band of frequencies. If it's manual, let the guitar howl, identify the frequencies, and then cut them. And then there's the other kind…

Some preamps, amps and guitars have automatic notch filters. The process is exactly the same as doing it manually - let it howl to identify where the issue is - but adjustment is done by a clever machine. Magic!

Often a welcome bedfellow of acoustic guitars, a well-chosen compressor can really tame some of the clacky-plinkiness [technical term - Ed] of electro-acoustics when set with very fast attack and release times. Don't go mad with the ratio unless you want an obviously compressed sound - anything 2:1 and up will give you that.

An appropriate reverb can add so much to your music and help inspire you. The wrong 'verb, meanwhile, can be totally unnerving and unnatural.

Ever found yourself trying to fight notes out of the guitar to be heard? Stop it - it's counter-productive. The more you push, the more it squashes and loses impact. You need to relax, turn up, and play more naturally and comfortably.

Voice or guitar, make sure you can always hear yourself loud and clear and accept nothing less. You'll make fewer mistakes and play with more confidence and dynamics as a result. If you routinely can't hear yourself, it's time for an acoustic amp! Start with our guide to 7 of the best acoustic amps for buskers and gigging musicians.