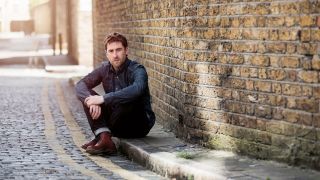 This singer-songwriter and first signing to Ed Sheeran's Gingerbread Man label is on the up - but was he expecting the 10 questions we ask everyone?

"It was an acoustic beginner's guitar, nylon strings, possibly classical. I'd asked for one for Christmas when I was eight. One of the first songs I learnt was Sloop John B, I love that tune.

"After that, I got a Washburn electro-acoustic, when I was 15, for a combined birthday and Christmas present, purely because I thought it looked cool with a burgundy marble-esque finish and a cutaway. I snapped the headstock twice and got it repaired both times."

If the building was burning down, what one guitar from your collection would you save?

"I have a Lowden S Series guitar - for sentimental reasons I'd definitely save that one. I was lucky enough to be shown around the Lowden factory recently when I was in Belfast. I'm not a guitar geek in any way, but it was fascinating.

"The one I own was actually sent back to them because the neck has a small knot in it and therefore wasn't perfect. How mad is that?! I love the fact that a branch grew out of it, and it makes this guitar completely unique."

"I gave the Washburn away to my nephew, so technically that isn't mine any more. I have a Taylor 410ce electro-acoustic guitar that's been with me for 10 years or so now. It's still my main gigging guitar, I feel very at home on it. It's starting to wear around the soundhole, but it's nowhere near the state of Glen Hansard's or Willie Nelson's guitar! It's a lovely guitar. I guess I've written most of my songs on it, so it's been through a lot with me."

"I use Jim Dunlop .73s. Nothing else feels right. Not sure why that is, it's something to do with the grip, I think."

"I'm the only one who changes my strings. I don't have a guitar tech, I'm not quite at that stage yet. There is also a sense of calm when changing strings that I quite like. Something a bit Zen about it, if that doesn't make me sound like a complete dick! I don't change them too often - I don't particularly like bright-sounding guitars and new strings always give you that."

"I play and sing, usually the first song I'm going to do, or something in the same key. I try and find the space that I want to sing in and take that with me to the stage. Does that make sense?

"Sometimes the day can be quite hectic, but my songs aren't, so I need to find the right mood, otherwise the show can feel a little off-kilter in my head and I never really settle. Five minutes after, I'm usually taking deep breaths and wondering if I did okay or not…"

What's the worst thing that has happened to you on stage?

"There were a couple of big gigs last year where I broke a string early on in the set with no backup guitar and no time to change strings. One was on the Taylor Swift date in Hyde Park and the other was opening for Ed Sheeran in Sydney - 12,000-plus people and I break a string on the second song!

"It was the bottom E string, I lost all the bass out of the chords, it sounded horrible, truly embarrassing. Luckily for me, Ed's people got in touch with Martin Guitars and they kindly sent me a backup; it's a lovely guitar, an OM-21, very warm-sounding and easy to play."

What song would you play on acoustic around a campfire?

"Daydream Believer: everybody knows it, everyone can sing along. It's one of my favourite songs and actually a brilliant chord structure, especially on the chorus."

"I've never given myself another option outside of music, I'm useless at everything else. Some might say I'm not great at this, but it's always paid my way in one way or another, which makes me successful at it.

"I'm with Dylan when he says, 'If you can wake up in the morning and go to bed at night and in between do something you love, then that is success.' I'm paraphrasing, but it's something along those lines."

"Learn your scales! Don't be so lazy. I didn't particularly enjoy lead guitar but at times it would really be useful to be able to play some, especially in collaboration. If I could tell myself anything it would probably be that. Oh, and not give up between the ages of 10 and 14, which I did. Those are good formative years that I missed out on for some reason."