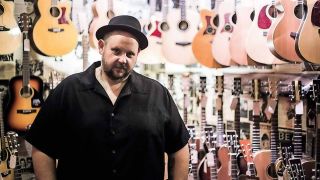 Jools Holland calls him "one of the great bluesmen of our time", but how will Big Boy Bloater fare with the 10 questions we ask everyone?

"I started playing guitar when I was about 10 or 11 - it was just a nylon-strung classical acoustic, which I wasn't really enjoying. Then my dad came home and surprised me with an electric guitar he had won in a bet down the pub.

"It was hand-painted leopardskin, and when I say hand-painted I mean everything: the body, the neck, the fingerboard, the scratchplate - everything had been painted with a two-inch brush. I couldn't even tell you what it was because everything was painted over, but it was kind of Strat-shaped. It was missing the whammy bar, so in its place, the previous owner had put a bicycle brake lever.

"It was pretty unplayable, so when my dad realised I was keen on guitar, he got me a Hohner LP-style, which was actually really nice. I was probably about 12 by then."

2. If the building was burning down, what one guitar from your collection would you save?

"I only really use one guitar, a 2005 Japanese Fender Strat. It's been modded a bit: new pickups, new trem block, tone and single volume. I call it the 'Bloatocaster'! It's a great guitar, it takes a lot of abuse and never lets me down, but it's not really anything special. If I lost it, I could replace it fairly easily."

"Sorry, readers, but I am not a guitar collector! I guess I'm not a hoarder anyway, but it's quite possibly also that, although I have always done this for a living, it has never quite brought me the riches to have guitars laying around just to be played occasionally. I used to gig a '63 Gretsch, but I got rid of it in favour of my Strat. I do have some other guitars, but nothing older."

"I like to use those huge picks about 1mm thick and I get them custom printed with my logo. I think they're meant to be bass picks - you know, the ones that are like a rounded-off triangle with all the sides the same length. I find I get a better grip on those big picks and end up dropping them a lot less often."

5. When was the last time you practised and what was it that you played?

"I practised this morning and I played a song from my forthcoming album. I wanted to see if I could do it on acoustic guitar. I don't tend to put time aside to practise as such, but there is always a guitar within reach when I'm working in my den, so I pick it up throughout the day and mess around with various things."

"I change them myself most of the time. I tend to change them every two to three gigs as my style of playing is very tough on strings - I do like to yank on the whammy bar quite a bit. I have a very particular way of putting them on that helps the tuning."

"I'd probably want to change something about all older recordings. There's nothing I'm really horrified by, although no way would you find me listening to the stuff I was putting out when I started out. You have to tell yourself you were happy with it at the time and move on. No regrets…"

"Drinking beer if I can possibly arrange it! We're very relaxed before we go on, usually chatting to the guys in the band, or out front, chatting to people. I also still like to go to the merch stand and meet people after a show, so as soon as I can get over there, I will."

"There's a famous festival up north I was booked to play with my old band and I was really looking forward to it, but on the way there, I started feeling ill. It turned out I'd contracted gastroenteritis and I was throwing up in the dressing room just before stage time, but managed to hobble on.

"About three songs in, I felt sick again, and had to keep running to the bin beside the monitor engineer to throw up mid-song. By the time we'd played an hour, I thought I was dead - I ended up collapsing and they had to take me to hospital."

10. What song would you play on acoustic around a campfire?

"Here Comes The Sun. George Harrison was such an amazing guitarist and it's such a simple riff, but he made it sound fantastic. That song also means a lot to me, personally."