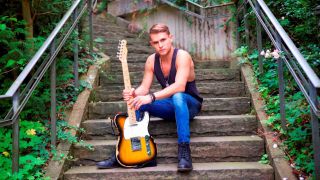 Now, Ben readies the release of second album, Time Has Come, which combines the raw fire of his onstage blues licks with a polished production - sure to please fans of soulful blues-rock and monster solos alike.

But first, the guitarist must face up to our 10 tried-and-tested questions - after all, his time has come…

"My first guitar was a little nylon-strung classical guitar, which I learned on and played classical fingerstyle on for a few years before I got my first electric when I was 13."

"My sunburst USA Telecaster; it's been with me too many places across the world already - even though I'm still in the early stages of my career. Three or four years on the road with other artists, and then a few years doing my own thing have already taken their toll on this guitar, hence the state it's in!"

"Probably my first electric guitar. It was just a Squier Strat, but for sentimentality it would be nice to still have it."

"A Gibson 335, or maybe another old Fender Pro Reverb. I already have a 1974 Silverface, but love it so much that I want to have a few of them!"

"Timing and phrasing is something that I think most guitar players perhaps neglect a lot, in place of working on chops and licks… so this is something I now try to never overlook, and always work on. I also think about these things a lot when I'm on stage."

"Warming up my voice and playing guitar backstage, and usually having a laugh with the rest of my band!"

"Signing CDs and saying hello to the punters."

"I had a full pint of beer thrown over me at a big festival we headlined in Holland a few years ago. Didn't let it stop us, though… the show must go on no matter how cold and soaked through I was, haha!

"Also, my whole band were sprayed with a fire extinguisher by a drunk punter at one of my first ever gigs in a little pub when I was about 15. I can laugh about it all in hindsight and they're funny stories, but obviously at the time it wasn't as amusing!"