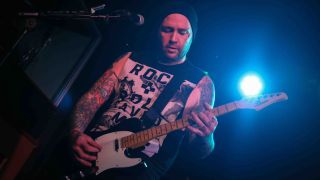 Since their platinum-selling breakthrough ANThology back in 2001 - and its chart-smashing cover of Michael Jackson's Smooth Criminal - it's been a tumultuous ride for Alien Ant Farm, but this month sees the band returning to UK shores to perform the album with which they made their name in its entirety.

Founding guitarist Terry Corso is onboard once more to disrupt the nu-metal tag with which the band have long been lumbered, courtesy of the dynamic, genre-hopping riffs he wrings from a Schecter T-style.

Just as the tour kicked off, we got hold of Terry to pose a question or two, and his to-the-point answers only go to emphasise the man's great taste in tone, players and, indeed, sports…

"I had a crappy Randy Rhoads Flying V made by a company called Arbor. My grandmother put it on lay away for me and I literally counted the minutes until it was finally mine."

"Probably my MXR Phase 90. I probably ape it a little too much."

"I had a couple of really great Supros from the early '60s. I miss them very much."

"Jeff Buckley. He had a bitchin' style."

"I've eaten shit more than once on stage as a result of mindlessly rocking out, but a couple of times I've gone off the front of the stage as well. That's never good."