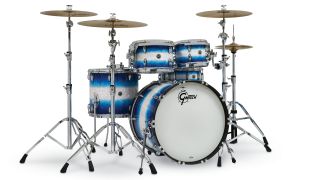 Gretsch has unveiled the addition of two new Nitron finishes to its acclaimed Brooklyn line: an eye-catching Blue Burst Pearl in the standard Brooklyn series, plus the retro-looking White Marine Pearl for its Brooklyn Micro set.

The new finishes - both wraps - bring the total number of colour options in the regular Brooklyn series to thirteen, seven Nitron wraps plus six satin lacquer finishes. Meanwhile, it extends the Brooklyn Micro options to a total of two along with the original Satin Grey finish.